She has powers she can't control 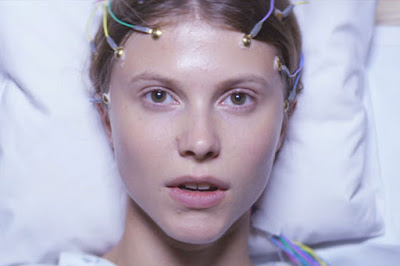 There are few new stories, only new ways to tell them. That may be important to remember as you watch Norwegian director Joachim Trier's Thelma, a coming-of-age tale in which Thelma, a first-year college student played by Eili Harboe, learns about the power of sexual desire. Thelma's separation from her parents (Henrik Rafaelsen and Ellen Dorrit Petersen) creates the situation in which her emerging sexuality bumps against the walls of repression established by her religious mother and father. Trier's chilly style fills the screen with images that rattle Thelma and us along with her. Some of these images occur during the seizures Thelma begins to have. Doctors can't pinpoint any cause for Thelma's distress, which seems to be exacerbated by her burgeoning friendship and sexual attraction to another coed (Kaya Wilkins). Eerie and full of disturbing sights, Trier's movie proves engaging enough to squelch criticisms that might arise from a plot that many have compared, with some justification, to that of Carrie. Whatever you make of Thelma, it's difficult to ignore Trier's ability to unsettle an audience. Besides, Harboe ably suggests a woman on the precipice of terrifying discoveries. Together, Trier and Harboe create a state of sustained unease that penetrates nearly every frame of the movie, and Thelma becomes a movie that's not so much about telling a story as about creating a world that matches Thelma's interior life. Thelma grapples with a mysterious force that she hardly comprehends but must learn to accommodate. Is this force a psychological response to religious repression? Is it something real or something imagined? Can Thelma really make things happen in the world external to herself? Trier wisely leaves us looking for answers, giving Thelma a feeling of tantalizing ambiguity.