A look at three Palestinian women

In Between focuses on life for Arab women in Tel Aviv. 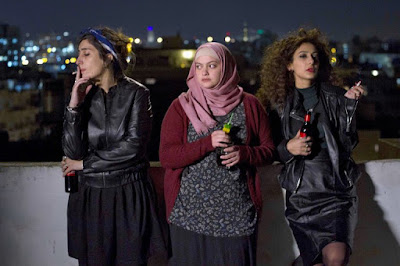 If at least two of the Palestinian women in the movie In Between didn’t live in Tel Aviv, you might have a difficult time telling them apart from any other women their age. And that may be the point of director Maysaloun Hamoud's keenly observed slice of Arab life in contemporary Israel. I especially value movies such as Hamoud's because they’re committed to the kind of statement that cinema always needs and too seldom makes: This -- the filmmaker says -- is how we live.

To start the cultural pot boiling, Hamoud introduces a new element into the lives of two roommates. The apparently religious Noor (Shaden Kanboura) moves in with two boldly secular women: Mouna Hawa's Leila, a lawyer who works on criminal cases, and Sana Jammelieh's Salma, an aspiring DJ who has held a variety of jobs. She's also a lesbian.

Noor, a student of computer science, takes up residence with these mismatched companions after her cousin moves out of the apartment and recommends that Noor, claiming to be bothered by dormitory noise, take her place.

Perhaps this unseen cousin had something more in mind than providing Noor with a good environment for study. Maybe she wanted to broaden Noor's exposure to a life about which she knows little.

Not surprisingly, Noor and her new roommates don’t always see eye-to-eye about how women ought to behave. The differences can lead to conflicts, mostly presented with a sympathy for both sides and without sitcom-like exaggeration.

The other important man in the movie — Mahmud Shalaby’s Ziad — is attracted to Leila and she to him, but eventually, Hamoud tests Mahmud's willingness to support Leila’s independence.

The story expands to include contacts with Noor and Salma’s respective families and, as a result, shows both the religious and social diversity of Israel’s Palestinian population.

Both the Christian and Islamic traditionalists we meet tend to view Leila and Salma as corrupted and perhaps beyond redemption. To the Western eye — at least to my Western eye — they could be young women living just about anywhere.

The movie includes a disturbing scene about which little should be revealed to avoid spoilers, and although Hamoud clearly sides with these women, she’s in tune with the complexities that challenge all of her characters.

In Between has the feel of lives depicted by someone who understands the difficulties of living under the strains of being an Arab in Israel and of dealing with a tradition-bound society that has difficulty accommodating women who want to chart their own courses. The result is engaging, lively and tough-minded enough to earn serious attention.