Chadwick Boseman stars in a fine Marvel Comics movie with a feel all its own. 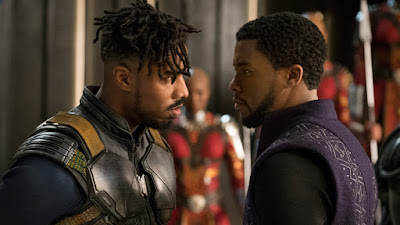 Director Ryan Coogler begins Black Panther, his Marvel Comics adventure, in Oakland in 1992. Although we’re looking at the streets of a city where kids play basketball on decaying courts, the ensuing sequence adds a whole other dimension. It starts with a knock on the door of a small apartment adjoining the basketball courts. One of the men in the apartment checks the peephole and says that a couple of "Grace Jones-looking chicks" are knocking.

I won’t reveal more except to say that in this Oakland-based prologue, we meet a king, two of his female soldiers and the king’s treacherous brother -- all from the mythical African kingdom of Wakanda.

That’s a lot of information for a movie that hasn’t really even started. But it’s telling because Coogler (Fruitvale Station and Creed) wastes no time linking the lives of those kids on an Oakland playground to an ennobling mythos that draws on African tradition. The movie involves a fair measure of fantastic developments, but they feel solidly grounded.

Whatever meanings you read into Black Panther, you’ll find a movie that’s filled with the kind of commanding characters who do as much to create the movie’s world as the CGI razzle-dazzle Coogler also employs.

The story centers on T’Challa (Chadwick Boseman), prince and soon-to-be-king of Wakanda. Wakanda allows the world to believe that it's impoverished and irrelevant. The country appears bereft but hides its true face from the world. In Wakanda, tradition and advanced technology mingle without strain; tribal culture is maintained while amazing technical feats routinely are accomplished.

Coogler, who wrote the screenplay with Joe Robert Cole, deftly balances action, exposition and a large cast of characters that includes T’Challa’s love interest (Lupita Nyong’o), a woman with her own agenda. Nyong'o's Nakia feels duty bound to use Wakandan knowledge to help an ailing world, so much so that she puts civic obligation before love.

We also meet a variety of other characters, the most important of them a ruthless refugee from Oakland named Erik Killmonger (Michael B. Jordan). Killmonger, a man with a giant chip on his shoulder and a plan to arm the world's non-white populations, eventually challenges T’Challa, a.k.a, the Black Panther, for his throne.

Perhaps because of the way Coogler creates the appealing landscapes and urban environments of Wakanda -- almost an African Shangrila -- and perhaps because the movie seldom feels less than mythic and elevated, Black Panther differentiates itself from every other movie ripped from the pages of Marvel Comics.

It's also encouraging to discover that the women in Black Panther boldly claim their turf. In addition to Nakia, there’s General Okoye (Danai Gurira), a warrior who wields a mean spear and who's ferociously loyal to Wakanda. T’Challa’s sister Shuri (Letitia Wright adds brashness as the young woman who invents and controls most of Wakanda’s miraculous high-tech inventions. Her obvious counterpart, Q in the James Bond movies — only with a devilish streak.

The women in the cast are in fine form, and so are the men, especially Jordan who's scary good as a man at war with the world. Unassuming and unburdened by an overload of machismo, Boseman’s Black Panther makes an appealing superhero. Better yet, he shares the movie with every other actor without ever getting lost in the action, plot mechanics, and comic-book jargon.

Black Panther probably will give Boseman his widest exposure yet, but he’s already proven that he’s a terrific actor in earlier work. (He should at least have been nominated for an Oscar for his stunning portrayal of James Brown in the underrated Get On Up.)
Black Panther more or less divides into two parts. In the first, Ulysses Klaue (Andy Serkis), an arms dealer, steals an African artifact from a British museum. We quickly learn that the artifact is made of Vibranium, the mysterious substance on which Wakandan civilization and the Panther's powers have been built. Klaue thinks he’s gotten hold of something that will make him rich, but his meanness is no match for those with bigger dreams.

At this point, we also meet Everett K. Ross (Martin Freeman), a CIA agent who gets swept up in Wakanda's affairs. I haven't even mentioned Daniel Kaluuya (Get Out), who plays one of T'Challa's allies.

And, yes, there’s abundant action, most of it decently handled by Coogler — from car chases in the cramped streets of Seoul, South Korea, where the movie takes up early residence to a final battle in Wakanda involving clashing warriors and charging giant rhinos.

Coogler and his team deserve credit for creating a great-looking and distinctive entertainment. But this is one helping of popular culture in which effects don't dominate every scene and characters have room to breathe. That’s good news for Marvel and even better news for those in the audience who think they’ve already had enough comic-book movies to last a lifetime.