Agnes Varda and friend take to the road 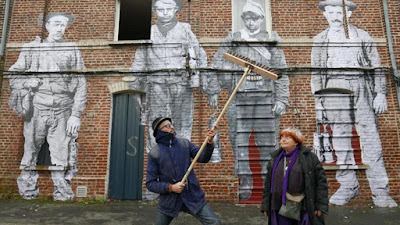 Faces Places — a documentary by Agnes Varda and a photographer known simply as JR — teams the 89-year-old director with a 33-year-old photographer who specializes in pasting large-format photographs on the least likely of places. Varda and JR set out on what appears to be a casual road trip. They stop, meet the locals, shoot photographs and paste them onto walls, shipping containers, large rocks and on the exterior of a decaying village that never had been inhabited. But if you think about what you’re watching, you’ll probably realize that this free-wheeling look at the traveling relationship between an older filmmaker with failing eyesight and a plucky young artist must have taken lots of planning — not to mention obtaining permissions to film in odd places. An example: A factory that manufactures hydrochloric acid. The relationship between Varda, who has adopted a two-tone hairstyle, and JR, who never removes his sunglasses, has some mildly testy moments (Varda doesn't always like JR's jokes), but mostly the two seem to enjoy each other’s company as they travel about celebrating and monumentalizing the lives of ordinary people. Filmmaker Jean-Luc Godard, a Varda compatriot from New Wave days, hovers over the movie, although he appears only a clip from one of Varda's films. At one point, JR pushes Varda through the Louvre in a wheelchair, paying homage to a scene Godard filmed for Band of Outsiders. The trip concludes when Varda and JR visit Godard’s home in Rolle, Switzerland. Godard refuses to answer the door, although he has scrawled a note on one of his house's windows. Her feelings hurt, Varda leaves her own note: “No thanks for your bad hospitality.” This little scene adds a note of sadness, a feeling that the past — no matter how vital it felt at the time — can’t be recaptured. At this point, JR senses Varda’s mood of melancholic acceptance. He tries to boost her spirits. But we know that for all its celebratory moments, nothing will overcome the feeling of evanescence that haunts this little movie: The art that JR makes surely will be ruined by weather and if he's lucky, he too eventually will experience the debilities of old age. But there’s nothing morbid in either the movie or in Varda’s attitude toward the conclusion of an amazing and well-lived life. At one point, she says she’s even looking forward to death because “that will be that.” No more films. No more adventures, but an ending that Varda seems to be approaching without regret and without abandoning her desire to live every moment until that final one.