Soft-core sex and soft-headed plotting make this chapter a bore. 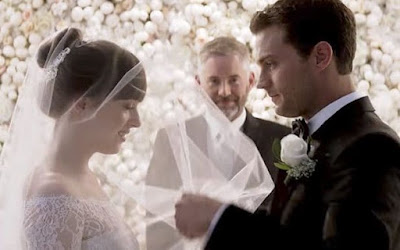 Anastasia and Christian Grey are now married. Don't feel bad. I wasn't invited to the wedding, either.

But I did see some of the photos. In fact, Fifty Shades Freed, the third movie featuring the bondage-loving couple of E.L.James' best-selling trilogy, opens with Dakota Johnson and Jamie Dornan reprising their roles as Anastasia and Christian by exchanging vows.

There's dancing at a glamorous reception before the happy couple hops on a private jet and heads to Paris. Of course, no honeymoon would be complete without a set of handcuffs to spice things up in the bedroom of Christian's luxury yacht, another part of the honeymoon trip.

Much of Fifty Shades Freed's one-hour and 45-minute running time involves sex scenes staged in various expensive surroundings as the Greys learn to adjust to married life. He's still too possessive; she bristles a little at the loss of some of her independence.

Don't fret, though. The Greys' idea of kissing and making up may involve being strapped to a wall, but it seems to work for them.

In this gauzy, soft-core world, money is no object. Maybe that's why the Greys feel free to bore us with their inane lives and well-sculpted bodies, putting the latter on display in much the same way as the trendy furnishings of the Grey's apartment or the film's fashionable settings.

If there's a strategy here, it might have something to do with pleasing the eye and subduing the restless mind. Anastasia's bare breasts and Christian's exposed butt substitute for plot points as the movie leafs through one coffee-table image after another.

Director James Foley takes charge of the conclusion of the Fifty Shades trilogy, which strains to find something to do with its two protagonists by introducing thriller elements in the final going.

The first movie, which was directed by Sam Taylor-Johnson, had the distinction of being better than anyone imagined it could be. The next two, both directed by Foley? Not so much.

You can tell a movie is running low on imaginative gas when it must work in a car chase, this one involving prominent display of Grey's spiffy Audi with Anastasia at the wheel.

None of these secondary characters matter because the movie runs them over as it pushes Anastasia and Christian toward conventional family life -- at least as it's lived in soft-headed fantasies that treat reality as if it were a disease no movie ever would want to catch.