Annihilation casts Natalie Portman as a biologist who combats a strange extraterrestrial force. 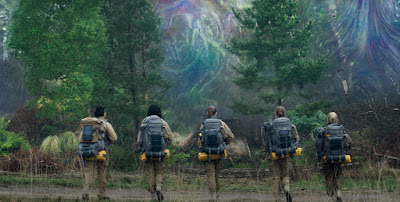 Director Alex Garland follows 2015’s brilliant Ex Machina with a movie that’s likely to provoke equal amounts of consternation and pleasure. In Annihilation, a loose adaptation of the first in a sci-fi trilogy by author Jeff VanderMeer, Garland imagines a world in which a mysterious and unwanted guest — dubbed The Shimmer — arrives on Earth. A viscous-looking force field, The Shimmer seems to be an extraterrestrial visitor that possesses staggering disruptive powers -- and it's spreading.

As a great admirer of Ex Machina, I found myself accumulating an increasingly mixed response to Annihilation, fascination and dread accompanied by a sense of disconnection as I vainly waited for the movie to gather something resembling profound force -- or at least the illusion of such force.

In what amounts to a prologue, Garland introduces us to Lena (Natalie Portman), a grieving biologist who teaches at Johns Hopkins University. Lena’s husband (Oscar Isaac), a soldier, has been missing for about a year. The two met when Lena also served in the Army.

One day, Isaac’s character mysteriously reappears. He doesn’t seem to remember where he’s been; his face has the blank look of someone who has been anesthetized. Suddenly, he begins bleeding from the mouth and must be rushed to a hospital.

At this point, Lena and her husband are spirited off to an outpost that seems strangely removed from anything resembling normal life. Lena learns that her husband is on life support and that she inadvertently has involved herself in a government effort to understand The Shimmer.

It doesn’t take long for Lena to join the latest expedition that's about to enter The Shimmer in an attempt to reach the spot where it first landed, a lighthouse.

Movies long have sent small patrols on dangerous missions, offering violent shocks along the way. Annihilation distinguishes itself by sending an all-female cast into the fray. Lena joins forces with a paramedic (Gena Rodriguez); a physicist (Tessa Thompson, and an anthropologist (Tuva Novotny). Skilled in the use of combat weapons, the women are led by a psychologist who previously selected those who would enter the Shimmer. So far, only Lena's broken husband has returned from such a mission.

It’s worth pointing out that Gena specializes in cellular-level investigations of cancer: Perhaps The Shimmer can be seen as a kind of traveling intergalactic cancer that has invaded the Earth. It has begun to mess up the DNA of both plants and animals, producing unholy combinations, interspecies creatures such as a giant albino alligator with the teeth of a shark or a bear whose bite may remind you of the creature in Alien.

The movie's attacks are graphically presented and geared to producing knots in most stomachs.

Garland’s greatest achievement involves the creation of the world inside The Shimmer, a multi-colored fungal paradise where dangers lurk and everything feels a few clicks away from normalcy. You almost can feel the dampness as the quintet of women moves deeper into The Shimmer's embrace.

The movie’s atmosphere feels strange and novel, but even as it seeps into your pores, some conventional conflicts emerge, well conveyed by the movie's players. Of these, Portman portrays the character with the most extensive backstory. Her stated reason for entering The Shimmer: To save her husband, which also means saving her marriage. I won't say more.

Garland wisely refuses to explain The Shimmer, allowing it and us to wallow in ambiguity. Is it a living thing? Does it have desires or is it simply a wanton force that indifferently spreads genetic nihilism?

It’s always precarious to try to read the mood of a preview audience, but I’d say that Annihilation came to an end without creating a widely shared response among those who had just seen it. Speculation on my part, of course, but you usually can tell when a movie has connected with an audience — even if you’re not on the receiving end of that connection.

There are reasons that audiences may be put-off. Garland tells much of the story in flashbacks as men in Hazmat suits question Lena. These intermittent interrogations stall the movie's narrative engine. It’s also possible that the movie's finale is too ambiguous to produce a collective “wow.”

Annihilation follows Lena to the end of the story; the result is creepy enough but it’s not clear that Annihilation will produce many blown minds. Maybe this is a case where laudable ambitions couldn't carry Garland far enough to make us more than interested -- if perplexed -- tourists in a weirdly conceived world. There, basic elements shatter and recombine in ways that, like the movie, startle and intrigue without ultimately cohering.