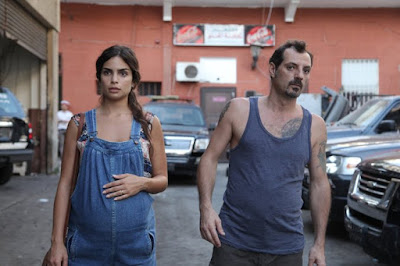 To get the most out of the Lebanese film The Insult you’d do well to learn a little about the Lebanese Civil War, a struggle that began in 1975 and didn’t reach its bitter conclusion until 1990.

Director Ziad Doueiri’s movie is set firmly in the present, but the lingering hostilities generated during a horrible civil war filter through every frame of a story in which a trivial incident — replacement of a drain pipe — escalates into a courtroom battle. Inside the courtroom, all the country’s tensions erupt, sometimes in overly ripe fashion.

The story centers on Tony Hanna (Adel Karam), a mechanic who gets into a feud-like argument with a Palestinian refugee (Kamel El Basha). El Basha’s Yasser works as a foreman on a construction crew that’s trying to bring the buildings on Tony’s block up to code. For Tony, even an act of goodwill becomes an intrusion, particularly if the "intruder" is a Palestinian.

Tony’s pregnant wife (Rita Hayek) tries to temper her husband’s rage, but nothing pushes Tony off a course that stems from a terrible incident in his past. Yasser had nothing to do with what happened to Tony, but Tony's hatred has been generalized to include any Palestinian.

Yasser has his own problems with the past; he’s one of some 100,000 Palestinian refugees who has taken up residence in Lebanon. As a refugee, he’s unable to work as an engineer, his chosen field. He has been forced into supervising laborers, and he does so with ingenuity and mostly without complaint.

Both Karam and El Basha give strong performances, El Basha as a foreigner in a country in which many resent his presence. Karam’s Tony becomes Yasser's antagonistic opposite: He's always giving into his emotions. He won’t budge an inch when it comes to looking for a resolution to the conflict that consumes him.

Doueiri (The Attack) has made a movie that hits its points on the nose, which some may find bothersome, but it’s helpful to remember that the lines of conflict that cut through every scene are drawn from reality.

Perhaps because The Insult spends much of its time in courtrooms, it occasionally loses a bit of steam, but Doueiri understands that the fate of every one of his characters is also the fate of a troubled country. Wisely, he refuses to allow us to forget those stakes.