The Argentine movie Zama takes us on a strange, often brutal journey. 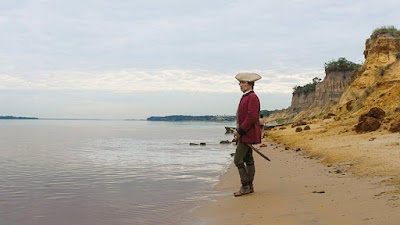 One of the frustrations of reviewing involves the number of movies (too many) opening in any given week. The problem with this perpetual flood of movies is that it's possible for good (and even important movies) to drown in the ever-surging multiplex tide. It would be a shame if that fate awaited Argentinian director Lucrecia Martel's Zama, the story of an 18th Century Spanish official whose life reaches ascending stages of ruin as he serves in South America.

Zama (Daniel Gimenez Cacho), the official in question, wants nothing more than to leave his post and return to the wife and children he left in Spain. But circumstance and cruel bureaucrats have consigned him to a life in which he's destined to waste away in colonial obscurity.

Patience is required to make it through the movie's opening scenes, which can feel as torpid as the humid air that Zama breathes. Martel uses the film's opening act casually to delineate the power equations that govern life in this little colony. It's not pretty.

Sometimes subtly, sometimes directly, Martel shows the cruelty and hypocrisy that fuels nearly every encounter between the Spanish interlopers and the colony's indigenous residents.

Not that Zama enjoys anything about this dominance: At nearly every turn, his ambitions are punished. A woman he regards as an intimate companion sleeps with someone else and a supposed subordinate receives a posting Zama wanted for himself.

The film concludes with a mysterious journey in which Zama leads a ragged band that's sent to capture a bandit whose murderous activities long have taunted the colonists.

He leaves the safety of the colony and begins to encounter people and situations for which he has no ready response. Zama already has been defeated before he encounters the primal forces that await him and that will bring him to his cruel, punishing destiny. The poor man can't even die.

There's much going on in Zama, which can be viewed as a movie of satirical impulses and brutal jests.

No matter what you make of this strangely enthralling movie, Zama will take you on a trip in which Martel serves as a remorseless, insightful guide, a director attuned to the small notes that let us know that we're in a world where we have no moorings -- and where many of the film's characters have no business being.