His tragedy: He no longer can ride

An authentic look at the post-rodeo life of a bronc rider. 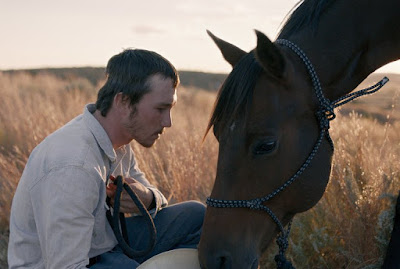 These days, we tend to think of head injuries as a byproduct of ferocious hits that occur during football games, particularly at the professional level. The Rider, a film that mixes documentary and fiction footage, alerts us to the dangers of another -- if less publicized sport -- rodeo bronc riding. But that's not all that's on the movie's mind. It's also about the ways in which a man's deepest identity can be challenged.

Brady Jandreau, a South Dakota bronc rider who suffered a terrible head injury, grew up on the Pine Ridge Oglala Lakota Reservation. In The Rider, Jandreau plays a character much like himself.

After a terrible rodeo accident, Jandreau’s Brady Blackburn, a Lakota cowboy, has been warned off riding by physicians. Brady trains horses that are too challenging for other wranglers, but he misses the rodeo life, which is tied to his long-held view of how he should live in the world.

Brady grew up with an ethos that’s as much a part of his being as his skin. Abandoning rodeo challenges his view that when you fall off a horse, you get back on. You don't whine. You don't feel sorry for yourself. You "cowboy up,'' as the saying goes.

Brady lives with his sister (Lilly Jandreau) and his father (Tim Jandreau), real members of Jandreau’s family. As is the case with Brady Jandreau, these non-actors give the film a feeling of authenticity that would otherwise have been impossible to obtain.

Brady must deal with a variety of blows to his ego: He goes from being a hotshot on the rodeo circuit to working check-out at the local supermarket. He still hangs out with his pals who seem to have hybrid identities: They’re cowboys with what looks like classical western values and they're Native Americans.

Beijing-born director Chloe Zhao doesn't do much by way of exploring any tensions between the cowboy and Native American psyche. Maybe that's the right approach. The characters in The Rider don't seem at odds with themselves. They're not the kind of men who much care about what others think.

If you were looking to cast a cowboy simply for looks, you could do no better than Jandreau. He's entirely believable as a bronc rider and horseman, probably because that’s what he has been. Handsome and stoic, the only physical mark of Brady's disability involves an ugly wound on the side of his head; his cowboy hat covers the staples. His right hand sometimes freezes in paralysis.

The most moving part of the movie involves Brady’s visits to another former rodeo roughneck (Lane Scott) whose injuries were even worse than Brady's. Now hospitalized, Lane can’t speak and he's partially paralyzed. Brady quietly and tenderly helps Lane with his rehab exercises, scenes that are touching and unimpeded by any displays of self-pity.

Zhao doesn’t try to fit her characters into stereotypical cookie-cutter molds to advance the movie’s drama or stir up false promises of romanticism. The relationship between Brady and his dad can be rocky, his concern for his mentally challenged sister is sweet and unforced, and he seldom complains.

Zhao gives us a character study and slice of life that’s memorably void of cant. She presents her characters as men who belong entirely to their own worlds.

Fair to say, though, that Zhao has made a movie about how one man copes with the pain that accompanies loss. Brady certainly knows how to "cowboy up," but we know his pain is real -- and so does he.