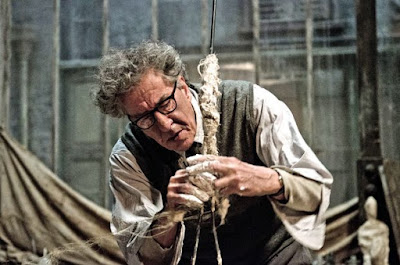 Common wisdom has it that a good deal of creative work is done by people when they’re not trying to do anything especially creative. Having labored over something, an artist may be on the verge of abandoning a project. The same frustrated artist then takes a walk or sees a movie or simply sets the problem aside for a while. Suddenly, it’s apparent what must be done and the work continues with confidence and conviction.

Or maybe some artists, as is the case with some people, are impossible totally to understand.

Director Stanley Tucci, flirts with this possibility in A Final Portrait, an intimate look at Swiss artist Alberto Giacometti at time when he's working on a portrait of James Lord]. The location: Paris. The year: 1964.

Geoffrey Rush, who resembles Giacometti, portrays the artist near the end of his career. Rush's Giacometti often seems distracted from the task at hand, and it's possible that the artist wasn't trying to find his creative mojo but rather was more interested in spending time with a prostitute (Clemence Poesy) who had captured his fancy or just getting drunk.

Sometimes, Giacometti leaves a bemused Lord in mid-pose while he fiddles with a piece of sculpture that has nothing to do with Lord's portrait.

This approach obviously arouses Lord’s curiosity and tests his patience.

As played by Armie Hammer, Lord mostly endures Giacometti’s eccentricities. He allows himself to begin a process that he expects to take an afternoon but which drags on for weeks with no end in sight.

Tellingly, Giacometti never explains himself to Lord. He puffs his cigarette, curses, rejects something he has done and perhaps stalks off in a fit of anger, probably at himself. Is he dissolute or is he waiting for the brush stroke that will inspire rather than disgust him?

So goes the movie with the exception of a few additional characters. Sylvie Testud portrays Annette, Giacometti’s wife. She supports him, although her husband's dalliances, financial irresponsibility, and massive neediness tax her emotional endurance.

Tony Shalhoub, who worked with Tucci on Big Night, portrays Giacometti’s brother; he’s sympathetic to Lord’s ordeal but knows enough not to involve himself in his brother’s tempestuous moods.

Last seen in Call Me By Your Name, Hammer has the movie's most thankless job: He's playing the artist's subject, but he's not the subject of the movie.

Lord, by the way, later wrote a book about Giacometti, whose cluttered studio seems deprived of both heat and comfort. Lord's patience eventually was rewarded.

It takes conviction to make a film such as Final Portrait and Tucci deserves credit for trying to peer into the world of an artist at the moment of creation. He also allows Rush the freedom to present himself as a man who already had achieved fame in the art world and who had succeeded in making himself the center of a life that required enormous artistic preoccupation, apparently leaving little room for anyone else.