'Avengers' long march toward the finish

A lengthy Avengers bobs and weaves its way through a penultimate chapter that sometimes falters but does offer some rewards. 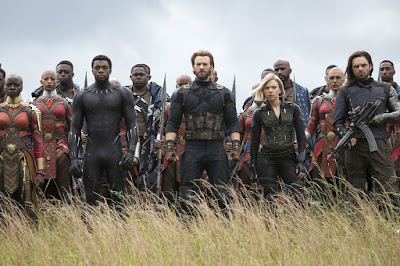 It's intended to knock your socks off and, in the end, it finally attains a stirring, if slightly morose, grandeur. We're talking about Avengers: Infinity War, the penultimate chapter in a series that thus far has spawned 18 movies, Infinity being the 19th.

This edition gathers all the Avengers -- from Thor to Spiderman to Iron Man to Black Panther to the Hulk and more -- into a single movie. It also expands the geographical scope of its concerns, taking us to New York, to Scotland, to the far reaches of the cosmos and to Wakanda.

And, yes, I'm omitting some of the movie's superheroes and super-places, but a two hour and 40-minute extravaganza creates far too many bases to touch for all but the most obsessive reviewers.

At the same time as the movie has enlarged, it also seems to have shrunk. Black Panther transcended the Marvel Universe with its irresistibly mythic celebration of Afro-centric culture. Infinity War marks a return to the Marvel universe.

Directors Anthony and Joe Russo (Captain America, Winter Soldier and Captain America, Civil War) seem to have decided that more is more as they pit dozens of superheroes against Thanos (Josh Brolin), a massive, rock-jawed warrior committed to gathering the Infinity Gems, six stones that will give him power over the entire universe and which also will result in massive amounts of death.

Thanos, a CGI motion capture warrior capable of pathos, believes his cause is just. He wants to rid an overpopulated universe of some of its inhabitants in order to save the rest. Brolin infuses the evil Thanos with genuine character, sometimes even approaching doubt about the choices he must make in order to fulfill his malign destiny.

In their quest to stop Thanos, various superheroes turn up on various planets and have various adventures as the movie punctuates its longueurs with the obligatory spasms of action. I'd be lying if I told you I cared about the outcome of all this battling, but when it comes to Marvel movies, we know precisely where our rooting interests are meant to lodge.

As expected, touches of humor (much of it paying homage to popular culture) also can found as the Russos navigate the choppy waters in which characters and storylines bob and weaver toward a finale.

Did I get lost? Not really.

The Russos manage to keep the characters distinct (no small feat), but I wish that instead of title cards announcing on which planet the movie had arrived, Disney had substituted title cards telling us which of the various characters we were watching. Who exactly is Vision, the character played with welcome elegance by Paul Bettany? And it took me a while to recall exactly what superpower Elizabeth Olsen's Scarlet Witch wields.

Honestly, I leave all that to the fanboys or those willing to revisit the 18 previous Avenger movies.

Benedict Cumberbatch (Dr. Strange) and Robert Downey Jr. (Ironman), by the way, carry on a reasonably entertaining intramural rivalry, and although Disney warned critics against revealing spoilers, I will tell you that some of the characters display touching affection for one another and that the Guardians of the Galaxy characters reprise their comic antics to mixed results.

As you probably already know, not all of the characters make it out of Infinity alive. I'm obviously not going to tell you who progresses to the final movie, but the fact that Infinity dispenses with favorite characters stands as a bold move when it comes to a long-running series. (Note: Many believe that the shocking impact of the deaths in Infinity will be undone in the next installment. In comic-book universes death often lacks finality.)

The best thing about Infinity War? I'd say the ending -- not just because this extended conclusion signals that we can move on to other pursuits (not to mention the nearest bathroom) but because the finale brims with large-scale spectacle, some of them overwhelming in the right ways.

A final note: I wish to express my gratitude to Disney for insisting that critics avoid spoilers; compliance with the request not only allows audiences to discover the movie's surprises on their own but allows for brevity in writing about a movie that can't count conciseness among its virtues.

Maybe story-telling economy would have been impossible with a roster full of actors -- all with fans -- playing so many superheroes. I’m looking forward to the next and purportedly final installment. I’m ready to bid the Avengers farewell before it's time for Iron Man to shed his high-tech armor for a walker -- or at least a cane.


Posted by Robert Denerstein at 1:10 PM