Dwayne Johnson's charms are lost in a routine thriller based on gene-editing. 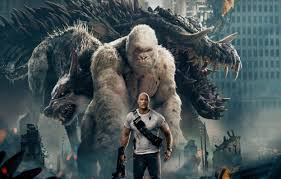 Movies long have made room for those who can establish a personality on screen, but might not be at home at The Old Vic. During his heyday, no one went to Arnold Schwarzenegger movies expecting Arnold to rival the DeNiros and Pacinos of the world. They went because Arnold was ... well ... reliably Arnold.

Same goes for Dwayne Johnson, a movie star who projects smiling affability better than he projects sneering toughness. Unfortunately, in Rampage — a movie derived from a video game dating to the 1980s — Johnson is upstaged by a trio of monsters and not especially original ones at that.

A movie that riffs on the dangers of genetic editing, Rampage suffers from its own mismatched cinematic DNA. At times, the movie plays like juvenile fare aimed at 12-year-olds. At other times, it opts for unabashed sentiment. And at still other times, it tries to cash in its monster chips by having a giant crocodile, a giant flying wolf, and a giant gorilla attempt to reduce Chicago to the kind of rubble that routinely has been strewn across the streets of countless predecessor movies.

This time out, Johnson plays Davis Okoye, a primatologist who once challenged poachers to befriend and save a rare albino gorilla he subsequently named George. Davis transported George from his African home to a San Diego wildlife facility, taught the gorilla how to communicate by signing and convinced George that he and those who cared for him were valued members of the gorilla's “troop.”

You don’t need much imagination to know that an evil corporation driven by a greedy executive (Malin Akerman) and her PR-oriented brother (Jake Lacy) are eager to use genetics to accumulate as many ill-gotten gains as possible.

After their company's deep-space genetic experiment crashes to earth during a brief prologue, George and two other creatures are exposed to canisters containing a horrible pathogen that will mix but not match their genetic makeup. The creatures become bigger and more aggressive, prompting a military response, which gives the movie a reason to drop in on a command center from time-to-time. Movies such as this need command centers, even when they're inhabited by misguided military men.

Tension presumably is meant to arise from fretting about poor George's future. Will George, a harmless prankster by nature, eventually return to his human-loving self?

Before that can happen, George must escape captivity so that he can trample his away across the country as the movie builds toward a finale in which George goes full Kong and climbs a Chicago skyscraper.

Early on, Johnson’s character acquires a sidekick (Naomi Harris), a genetic researcher who once worked for the evil corporation and holds the key to developing an antidote that will restore the creatures to their less dangerous state.

Rampage can’t totally accept its own destructive impulses. Late in the picture, Johnson is called upon to deliver a line in which Davis must proclaim to a charging crocodile that he’s had his fill of its mindless cruelty. Davis employs the “MF” word, but the final part of the expression is muffled, perhaps to keep the movie within what might be called “family-oriented bounds.”

Directed by Brad Johnson, who previously directed Johnson in San Andreas, Rampage isn't the first movie to toy with the dangers of genetic experimentation and it surely won't be the last. But Rampage is so far from qualifying as a best of its breed that a movie such as Jurassic Park looks like a doctoral dissertation by comparison. Enough said.