A softer movie for Isabelle Huppert 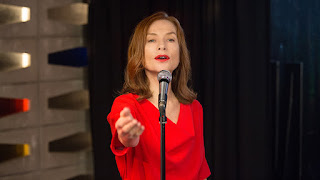 Isabelle Huppert never quite allows us to penetrate the enigmatic challenge she presents with almost every character she plays. Huppert never ingratiates herself or her characters with audiences. Her expressions suggest mystery, something about an indistinct but important past. Generally, Huppert's mixture of self-possession and depth work to create signature performances, but they don't quite fit Huppert's new movie, Souvenir, a trifle of a romance that teams Huppert with French star Kevin Azais. Huppert plays Liliane, a woman living a dreary life in which she goes to work each day at a pate factory. Antiseptic and lifeless, the factory looks as if it could have been lifted from a satirical riff about food that has lost its power to nourish. Routine dominates Liliane's life: Go to work. Take the bus home. Watch quiz shows. Change arrives when Huppert's character meets a new employee at work. An aspiring young boxer, Azais's Jean recognizes Liliane as a former contestant who sang on popular television talent show that attracted national attention. Jean draws a reluctant Liliane back into the show-business fray. Director Bavo Defurne does little to turn the movie into anything more than a pleasant diversion -- the kind of movie in which not much comes as a surprise but we hardly care. When Liliane tells the much younger Jean that their relationship could never possibly work out, you can bet that, after a few beats, a committed embrace will follow.