The wild journey of a Japanese woman 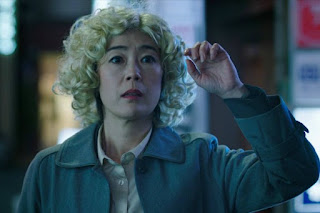 Zany, ridiculous, tragic, ever so slightly uplifting. Each of those adjectives could describe Oh Lucy! a film about a Japanese woman whose life has slipped into an anonymous rut. Setsuko (Shinobu Terajima) works in a nondescript office. She’s in her 40s and her life is going nowhere. Enter Setsuko's niece (Shiori Kutsuna), who says she must sell the remaining portion of an English course in which she's enrolled. Kutsuna's Mika needs the money and her isolated aunt might benefit from some social contact. It doesn't take long for Mika to take off for America with the English teacher (Josh Hartnett). Should Setsuko have known she was being played? Of course. The teacher -- known as John -- works in a spare room at a massage parlor/brothel, resorting to methods so weird they would have tipped off all but the most gullible of students. John insists that Setsuko wear a curly blonde wig, gives her a western name (Lucy) and punctuates routine English phrases with hi-fives and hugs. Another student (Yoji Yakusho) has been given an equally improbable name. He's Tom. Setsuko isn't entirely a dupe; she senses that there might be something exciting in this bizarre English class. Deprived of physical contact, she also likes the hugs. As ridiculous as it is, the blonde wig alerts her to a neglected side of herself and she decides to go with it despite warnings. Mika's mother (Kaho Minami) already had cautioned that helping the young woman would lead to no good. After being duped, Setsuko takes off for the US in search of Mika -- first in Los Angeles and then in San Diego. She’s not happy that Mika’s mother joins her on the trip. In LA, the sisters locate Hartnett's character who says Mika has left him. He joins the search. That sounds like a ton of plot, but Oh Lucy!, derived from a short film the director previously made, is a slender movie that offers plenty of comic pleasure before writer/director Atsuko Hirayanagi pulls off an abrupt shift in tone and the movie puts comedy in its rearview mirror. Within a small frame, Hirayanagi manages to say something about the consequences of desperation and the enmity that can develop between sisters. Led by a Terajima -- who wisely keeps Setsuko's motivations vague -- an able cast creates a genre-defying movie that takes us deep into the kind of life that normally would go unseen.