The pain of 'Love After Love'

Andie MacDowell finds a rich role in this story of a grieving family. 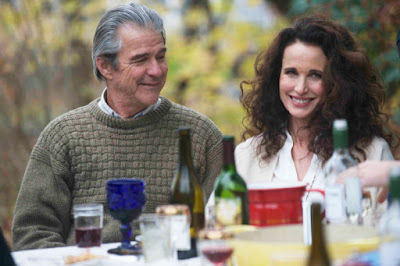 Love After Love has been hailed for providing Andie MacDowell with an opportunity to show that she really can act. If so, MacDowell owes a debt of gratitude to director Russell Harbaugh who cast her as Suzanne, a recently widowed woman and the mother of two grown sons (Chris O'Dowd and James Adomian) who look as if they might be MacDowell's contemporaries. (For the record, MacDowell just turned 60; O'Dowd is 38; Adomian, also 38.)

Maybe what appear to be blurry lines of age and relationship are part of Harbaugh's point: Almost no one in Love After Love seems to have matured into a clearly defined adult.

Harbaugh presents the story of a grieving family in dramatic shards, eliding the passage of time in ways that occasionally make it difficult to keep track of the characters. He leaves it to us to piece the movie together. Nothing wrong with that, but I wish the pieces of Harbaugh’s domestic jigsaw fit more elegantly together. Sometimes, it seems as if he’s tripping into scenes the way a person might stumble into a darkened room before turning on the light.

Early on, the movie makes Suzanne a widow. Harbaugh depicts the death of the family patriarch (Gareth Williams) in brief, unsparing strokes: a loss of voice and mobility and finally an exit from his home, courtesy of a couple of undertakers.

Gradually, we get to know the various characters whose lives revolve around Suzanne, luminous in appearance and bristling with feelings she may not always understand.

O’Dowd’s Nicholas works as a book editor whose marriage to one of his publishing-company colleagues (Juliet Rylance) is falling apart. It doesn’t take long for Nicholas to find a new victim for his love. Soon after his divorce, Emilie (Dree Hemingway) marries Nicholas, a union we presume is doomed from the start.

Harbaugh and his co-writer Eric Mendelsohn present a series of family dinners that range from unpleasant to excruciating. At one of them, Nicholas’ brother Chris (Adomian) gets so drunk he winds up urinating in the foyer of the home in which he's a guest -- not the best way to say thanks for dinner.

O’Dowd dominates another dinner scene in which Nicholas expresses crushing cruelty toward a man with whom Suzanne has begun a relationship.

Mired in unexpressed (and perhaps unfelt) grief, Love After Love can be read as a protracted essay on self-absorption so deep even the death of a loved one can’t dislodge it.

Make up your own mind about David Shire’s jangled jazz score; I found it as obtrusive as was illuminating.

An all-in cast doesn't shrink from the painful nature of material steeped in dissonances and disturbance.

At one point, Chris — a failed comedy writer — takes a turn at stand-up comedy. He delivers a riff on the ways in which Jesus simply couldn't measure up to the achievements of his father. However irreverent and amusing Chris may be, he appears to be talking more to himself than to his audience, something Love After Love sometimes seems to be doing, as well.