In 'Blockers,' parents are the joke

A gross-out comedy in which young women occasionally display good judgment -- or the movie's idea of it. 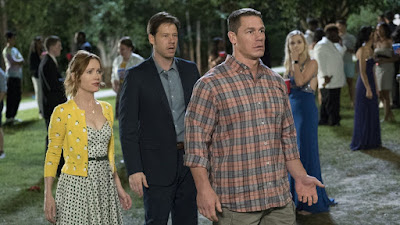 Teen gross-out comedies have become a staple of popular culture, usually tempering their worst (or as some would have it “best”) instincts with last-minute infusions of sentiment.

Directed by a woman, Blockers proves the mildest of exceptions to the rule. The story centers on three young women who pledge to lose their virginity on prom night. Their parents get wind of the plan and decide to do everything in their power to keep their daughters from losing their innocence.

Of course, the kids are more mature than expected and the adults are too stupid to realize that innocence and virtue aren't necessarily related to sexual behavior. So goes the contrivance that, as much as the obligatory gross-out jokes, links the movie to the contemporary teen genre.

The three high school seniors (Kathryn Newton, Geraldine Viswanathan, and Gideon Aldon want to have a good time, but ultimately approach their project in generally sensible ways. One of the young women even acknowledges her gayness before the night is done.

The adults bear the brunt of the movie's jokes.

Made wary by her own early sexual experiences, one of the girl’s moms (Leslie Mann) can’t help but see the worst outcome if her daughter has sex. Mann’s character is joined by a ludicrously uptight father (John Cena) who works as a coach and another dad (Ike Barinholtz) who hasn’t had much contact with his daughter, but who tries to sound a more reasonable note.

Cena's character, a man with a buzz cut and a head that looks as if it had been carved from granite, looks like a parodic version of a movie superhero that never quite got off the drawing board.

Comedies such as Blockers need set pieces that are intended to create both laughs and post-movie talk. The biggest of these super-gross-outs involves a scene in which Cena’s character follows his daughter to a prom-night party.

In order to fit in, Cena's character is goaded into engaging in an activity that has all the earmarks of something you wouldn’t want to try at home or anywhere else for that matter: It’s called "butt chugging," an activity that needs no further elaboration.

Director Kay Cannon (author of the Pitch Perfect screenplays), working from a screenplay by Brian and Jim Kehoe, also serves up a scene involving projectile vomiting. You'll find a couple of silly sex farce moments between a horn-dog of a dad (Gary Cole) and his equally lusty wife (Gina Gershon).

A comic veteran, Mann knows how to handle this kind of material, and movies such as Blockers usually manage to find an audience -- even when, as is the case here, they're hit-and-miss affairs. Besides, every generation needs a gross-out extravaganza to call its own. Is there any real point in objecting?