A boy and a wolf develop a strong bond

Alpha does a decent job as a prehistoric adventure with an emotional core. 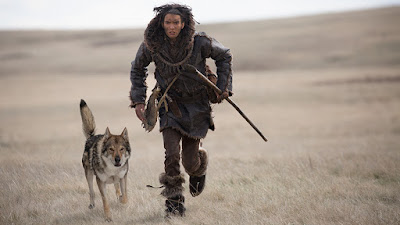 Set in Europe 20,000 years ago, Alpha introduces us to a small tribe of hunters struggling to survive at the end of the Ice Age. The tribe has a leg up on other movie residents of pre-history: These tribesmen already know how to start fires. They wear clothing made from animal hides. They speak a language that seems reasonably well developed. (Promotional material for the movie says the language was created for Alpha.)

Food remains a problem. Each year, the men of the tribe set out on a hunt for steppe bison, beasts that will help them make it through the brutally cold winters.

The hunt also provides a testing ground for the tribe's young men. Do they measure up? Will they prove themselves able to close the deal when it came to killing for food?

Directed by Albert Hughes, who with his brother made the great 1990s film, Menace II Society, Alpha focuses on young Keda (Kodi Smit-McPhee), a young man who must make the transition from boyhood to manhood. Keda’s mother (Natassia Malthe) worries that the Keda has more heart than killer instinct, but his father (Johannes Haukur Johanneson) pushes the boy, offering him some Darwinian advice: Life is for the strong. Dad wants Keda to emerge as a leader.

Full of raw imagery and gripping action, Alpha includes a heart-pounding scene in which the men of the tribe close in on a herd of bison. In the ensuing stampede, Keda is thrown off a cliff and left for dead on a ledge from which there appears to be no escape.

I won't say more, but Keda manages to revive himself and then tries to return home. The adventurer’s journey gives Alpha a tried-and-true storyline. The hero must battle long odds to return to the place where the story began.

Along the way, Keda develops a relationship with a wolf, a wounded animal that slowly makes the transition from foe to friend. Keda names the wolf “Alpha.” Alpha learns to help Keda hunt and also provides the boy with companionship. The young man and wolf develop mutually beneficial dependencies.

Ample use of CGI helps Hughes deliver the adventure goods in a movie that doesn’t skimp on sights that might put you off your popcorn, eating maggots, for example.

Quibbles? Many. The men look a bit too clean for their historical moment and their use of language seems overly advanced. Early on, Keda’s mom talks about how much she loves her son. I couldn't help but wonder what the word "love" might mean in the Ice Age anyway?

Young Keda also complains about the odor of some of the characters, something you'd think he'd have gotten used to in this pre-deodorized age.

For all that, Hughes works to create a convincing natural environment, creating a feeling for a time when darkness really was dark and the sky brimmed with twinkling stars. He captures some of the mystery of an encounter with nature that has been lost to progress.

I wouldn’t call Alpha a classic and I can’t keep myself from sometimes chuckling at prehistoric dramas featuring men who have been groomed to look as if they’ve never seen a mirror without totally persuading us that these same men haven’t just arrived fresh from a make-up trailer.

Still, Alpha succeeds in blending a simple and affecting story with lots of action. It's a reasonable exercise of imagination -- if not an entirely convincing one -- about the time when our enduring bonds with dogs began.