Operation Finale proves a routine movie about a less-than-routine subject. 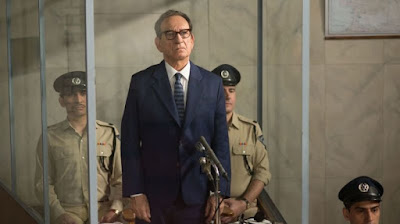 I was a teenager when the trial of Adolf Eichmann was televised in the US, I believe via videotape. I remember watching as the architect of Holocaust efficiency, looking as nondescript as a conventioneer at a gathering of insurance agents, sat inside a glass booth in a packed Israeli courtroom.

In his captivity, Eichmann no longer seemed like a fearsome member of Hitler's SS. He twisted his mouth in various directions. He took notes. He sometimes looked bored or indifferent. It was easy to see why Hanna Arendt, who wrote the landmark book Eichmann in Jerusalem, came to see Eichmann as a representative of the "banality of evil," an overused phrase that has been much disputed recently.

In his final days, the man who had arranged the deaths of millions looked like nothing more than a peculiar specimen, Nazism under glass.

Now comes Operation Finale, a movie that tells the story of how agents from the Mossad and Shin Bet discovered Eichmann in Argentina, apprehended him and brought him to Israel for a trial. Ben Kingsley portrays Eichmann and, no, I didn’t entirely buy him the role.

The gifted Kingsley is by no means terrible, but I couldn’t lose sight of the fact that I was watching him take on qualities of Eichmann that might have been glimpsed from watching YouTube videos of his trial and from reading. Kingsley shows flashes of anger and irritation, even an outburst of cruel arrogance. But it struck me that Kingsley, an actor of enormous technical precision, is interpreting Eichmann, not inhabiting him.

But that’s not all that’s wrong with Operation Finale. Director Chris Weitz (The Twilight Saga: New Moon) gives Eichmann's capture a play-by-play treatment that’s mirrored in the surprisingly unsurprising performance of Oscar Isaac, who portrays Peter Malkin, one of the agents who brought Eichmann to Israel. The mission to capture Eichmann was bold and daring, qualities Weitz's dutifully rendered account seldom matches.

Eichmann’s presence in Argentina was discovered when a young woman (Haley Lu Richardson) met Eichmann’s grown son (Joe Alwyn). Richardson's character was Jewish; her father was a Holocaust survivor. She knew what to do with information about Eichmann despite the fact she had genuine feelings for Eichmann’s son.

It turns out that Eichmann’s son, who claimed that his father was dead, was heavily involved with the numerous Nazis and their Argentine enablers who had taken refuge in Argentina after the war. Meetings of these unrepentant Nazis constitute one of the movie's more harrowing elements.

The members of the group that captures Eichmann, some of whom lost relatives during the Holocaust, must restrain their personal feelings and conquer any impulse toward vengeance. Most of them would have been happy to put a bullet in the Nazi’s head.

But the Israelis, particularly prime minister David Ben-Gurion, understood the value of putting Eichmann on trial: It would allow him to be judged by his Jewish accusers and would put Holocaust crimes on display for a world that wasn’t terribly well-informed about them.

In order to smuggle Eichmann out of Argentina, the Israelis planned to disguise him as an El Al crew member and slip him on an airplane. He’d be drugged and passed off as a crew member who had had too much to drink. For obscure reasons involving extradition law, the airline required a signature from Eichmann saying that he was willingly being brought to Israel for trial -- at least that's how the movie tells it.

Obtaining this signature becomes a central issue, shrinking the movie to play-on-film size. In a safe house in Buenos Aires, the Israelis try to persuade Eichmann to put pen to paper so that they can scurry him out of Argentina. Isaac's Malkin believes he knows how to obtain the signature and get on with the mission. Can he outfox a fox?

By the time the film reaches Israel, the screenplay suggests that Malkin, who lost a sister and her children to the Nazis, has achieved a bit of closure.

Eichmann was hanged in 1962, but his trial and punishment couldn't possibly measure up to the enormity of his crimes. Though essential, the punishment of individual perpetrators of genocide arrives without emotional release. It would take another film to bring us face-to-face with such confounding moral horror, one that didn't so often feel like a diligent re-enactment of real events.