A second helping of 'Papillon'

Gritty detail and grim realism may not be enough to justify another version of a familiar story. 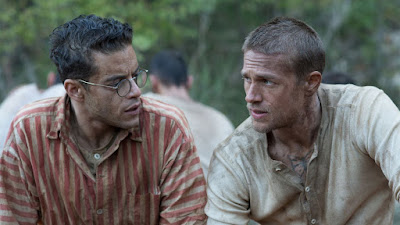 The unavoidable question that haunts any viewing of the new movie Papillon falls squarely on the shoulders of the 1973 movie of the same name. That movie that told the gripping story of one man's attempts to escape the torment and terror of a penal colony located in French Guiana. Could anyone pull off a second helping?

The 1973 movie starred Steve McQueen and Dustin Hoffman in what then seemed like odd-couple casting.

McQueen was a movie star with a well-defined big-screen persona; Hoffman was an actor with a capital “A.” We went to McQueen's movies to watch a cool, emotionally contained hero dominate the screen; we watched Hoffman's work to see an avid actor dig his way into the characters he played.

Written by Dalton Trumbo and Lorenzo Semple Jr. and directed by Franklin Schaffner, the 1973 movie created a commercial splash.

The 2018 version of Papillon doesn’t generate the same kind of excitement and probably couldn’t. When the first movie arrived, the wave of new technologies — from VCRs to streaming — was still waiting in the wings. Movies seemed bigger, less disposable.

So why, in a time of movie abundance (at least in terms of numbers of releases), remake a movie that already did the job of introducing American audiences to Henri Charriere; a.k.a., Papillon, and Louis Dega, two French criminals who served time in a sweltering prison hell in South America?

Danish director Michael Noer answers the question by amping up the movie's grit and cruelty, probably to heighten its raw authenticity. His movie sweats and brutalizes.

Charriere, the McQueen character now played by Charlie Hunnam, gives the movie its sinew and drive. Wrongly convicted of murder in 1931, Charriere receives a life sentence. En route to the prison, he meets Dega, the Hoffman role now played by Rami Malek. A forger by trade, Dega has enough money to ease some of Guiana's pain. Prisoners could buy their way onto better work details, for example.

Understanding this, Charriere, bereft of financial resources, offers to protect the weaker Dega from the prison’s many predators. The two develop an uneasy relationship.

The authenticity of Charriere’s account has been questioned, but his story stands as a tribute to the unbreakable will of a man who refuses to be crushed. Charriere, who wrote a best-selling book about his experiences, never relinquishes his hope for escape, to free himself from the choking burdens of stupid authority.

Hunnam, last seen in James Gray’s The Lost City of Z, and Malek, of TV’s Mr. Robot, may not generate the box-office heat once sparked by McQueen and Hoffman, but both are good. They fully embrace the movie's challenges: weight loss, punishing fights and sustained reaction to a fear-drenched climate.

The movie devotes much its time to depicting the sadism that prevailed in French Guiana, delivered at the hands of both prisoners and guards. Escapes were greeted with years in solitary. Those deemed murderers were executed by guillotine while the assembled prisoners were forced to watch.

Though more harrowingly detailed than the first installment, this new Papillon still tells the same basic story as the 1973 movie and, as a result, can’t help but surrender some of its power. Put another way: An inescapable aroma of redundancy limits this credible but exhausting edition.