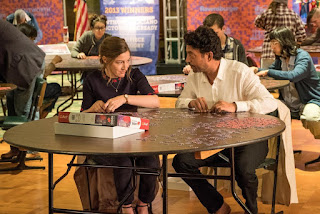 Kelly Macdonald, who made a major impression on HBO’s Boardwalk Empire, scores in Puzzle as a housewife living a drab life with her garage-owning husband (David Denman) and her two teen-age sons (Bubba Weiler and Austin Abrams). As the only person in the house who's happy, Dad can't seem to understand why everyone else doesn't share his contentment. A movie such as Puzzle isn't exactly shrouded in mystery: We know that Macdonald's Agnes is due for some break-out moves. She begins to find her voice when she discovers that she's a whiz at assembling jigsaw puzzles. She sees patterns where others see chaos. When Agnes travels to New York City to buy puzzles, she notices a note on the bulletin board of a game store. Turns out a wealthy investor (Irrfan Khan) is searching for a partner to enter a doubles jigsaw contest. Not everything Agnes does to break a mold defined by her Catholicism and convention feels credible, but Macdonald's tentative, slowly emerging performance gives the film a strong center. Based on a 2010 Argentinian film Rompecabezas, Puzzle employs a fine cast that's a bit let down by a story that never quite peaks. Still, director Marc Turtletaub respects the performances, which are all first rate and Puzzle tallies a distinct — if minor — victory.

An authentic look at world of skateboarding. Is that enough? 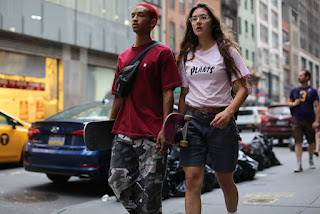 Skate Kitchen immerses us in the world of teenage girls who live in and help define skateboard culture. Director Crystal Moselle, who directed the fine documetary Wolfpack, gives her movie lots of authenticity, building her story around Camille (Rachelle Vinberg), a skateboarder who's frequently at odds with her single mother (Elizabeth Rodriguez). Mom thinks her daughter should find something better to do with her time than use Manhattan as a skateboard playground by latching on to the back of trucks or sliding down banisters, for example. Maybe Mom is right: Early on, Camille is "credit-carded," a phrase referring to what happens when an errant skateboard lands in a boarder's crotch. Moselle spends more time developing the skateboard scene than she does with a plot that ultimately finds Camille establishing a relationship with a boy (Jaden Smith) who once dated one of her skating buddies (Dede Lovelace). Frankly, I'm a little tired of movies steeped in teen culture, even when it's presented with a degree of realism that makes the movie feel as if it might have been derived from a documentary. I've read that the cast includes many non-actors, young women from something known as the Skate Kitchen Collective. A documentary about them might have been just as revealing as this meandering feature.