Puppets, profanity and a shortage of movie 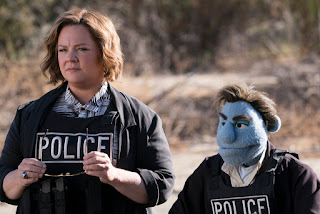 If you've ever had a desire to see Muppet-like puppets talk dirty, you may find a few laughs in The Happytime Murders, a production of Henson Alternative and director Brian Henson (son of the late Jim Henson). The Happytime Murders quickly reveals itself as a kind of crude Judd Apatow wannabe, a comic helping of noir that's trying way too hard to wring laughs from the incongruity between puppets and profanity. Set in a fantasy version of LA, where puppets and humans live in uneasy proximity, the story centers on former LAPD puppet detective Phil Philips (Bill Barretta). Early on, Phil, now working as a private investigator, takes a case brought to him by a ludicrously oversexed blonde puppet (Dorien Davies). The movie centers on Phil's efforts to discover who's bumping off the cast of a defunct puppet TV show -- The Happytime Gang. With the show about to go into syndication, there's money at stake. Oddly, the best work in the movie comes from the human cast. As an LAPD detective who once served as Phil's partner, Melissa McCarthy brings snap to the snide insults she trades with Phil. Maya Rudolph has an equally nice turn as Bubbles, Phil's secretary. Elizabeth Banks turns up as the only human member of the Happytime Gang cast. A major sight gag involves puppet sex and prolonged ejaculation, which should give you a clue about the level of humor. What's missing? A level of sophistication that might have turned Happytime into something more worthy. As it stands, watching the cotton innards blasted out of puppet murder victims doesn't exactly serve as wry commentary on movie violence. Look, there's nothing much to say about Happytime Murders other than to tell you that there are a couple of laughs and not much else to fill a 90-minute running time. If you go, stay for the end credits, which show how the movie's puppets were integrated into a human world.
Posted by Robert Denerstein at 4:10 PM