A haunted study of ambition and class

The Little Stranger proves absorbing yet the movie ultimately fails to satisfy. 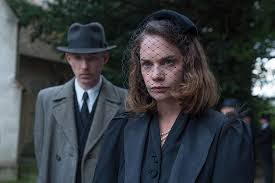 In reviewing Sarah Walters' novel, The Little Stranger, the British newspaper The Guardian noted that the author "operates in the queasy borderlands between the supernatural and the psychological" and that Waters navigates this territory with "supreme ease." The same could be said of the big-screen adaptation of Waters' 2009 novel -- at least for a while.

Director Lenny Abrahamson (Room) delivers a carefully constructed, meticulously acted and deliberately paced movie that ultimately fails to sharpen any of its potentially resonant themes. Both a ghost story and a view of a crumbling British class structure after World War II, Little Stranger creates significant interest but fails to build toward a totally rewarding payoff.

Domhnall Gleeson portrays Dr. Faraday, a physician who's summoned to a dilapidated country estate to look into the illness of 14-year-old Betty (Liv Hill), a teenager who serves the once wealthy Ayres family. Turns out Faraday had been to the estate as a boy in 1902; i.e. before its glory had begun to fade.

Slowly, Faraday's fascination with the decaying estate emerges; to him, the place, though rundown, still represents ascendance into a class that he has been forced to observe only from the outside and to which he very much aspires.

As the movie develops, Faraday immerses himself in the lives of the Ayres family. Roderick Ayres (Will Poulter) has returned from the war, his body badly burned and his spirit scarred; Mrs. Ayes (Charlotte Rampling) does her best to maintain the appearances of the family's former stature; and Caroline Ayres (Ruth Wilson) attempts to run the place.

Perhaps seeing her as a gateway to this aristocratic paradise, Dr. Faraday pursues Caroline in what surely qualifies as one of the screen's least romantic love stories.

All the while, paranormal occurrences (banging, clattering and strange scrawl on walls) appear, suggesting that the house is occupied by a malevolent presence that's intent on destroying the family. As the purported rationalist in the crowd, Gleeson portrays Faraday with an expressionless, steady hand that's a trifle boring. Wilson, who knows how to create interest and ambiguity, portrays a woman with an odd, lumbering walk and a fondness for corduroy pants.

Abrahamson presents the story in a quiet way that some viewers (myself included) may find absorbing. But roughly three-quarters of the way through The Little Stranger, it's difficult not to begin hoping that a narrative kick in the pants will provide something resembling satisfaction.