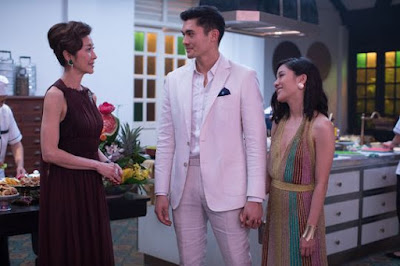 At one point in Crazy Rich Asians, the unashamedly lavish adaptation of author Kevin Kwan's bestselling novel, an affluent resident of Singapore encourages his son to eat his dinner by telling him that children are starving in America.

With a single joke -- casually delivered by Ken Jeong -- the movie signals a global reversal of fortune. Forget American prosperity. Asia is not only on the rise, it already has risen. Take that white people.

That's the closest we get to satire in Crazy Rich Asians, a movie so preposterously glamorous, it manages to go beyond fantasy into a material nirvana in which consumption is abundant, conspicuous and treated as an irrevocable birthright of the movie's rich second-generation Asians.

Rather than lampooning the capitalist devotions of the impossibly wealthy residents of Singapore -- a city that couldn't be any more invitingly displayed than it is by director Jon Chu -- Crazy Rich Asian turns into the year's most beautifully appointed rom-com: Crazy Rich Asians tells the story of an American economic professor (Constance Wu) who falls in love with the favored son (Henry Golding) of a wealthy Singapore-based family before she knows that Golding's Nick Young is rich enough to buy half of New York.

The story embarks on its journey when Nick invites Wu's Rachel Chu to travel with him from New York to Singapore for his best friend's wedding. She doesn't know that Nick not only has model-quality looks but belongs to one of Singapore's wealthiest families. He's not just another guy; he's a walking conglomerate.

Of course, Nick's best friend Colin Khoo (Chris Pang) also is fashion-plate handsome, evidently a requirement for the movie's casting director who has populated Crazy Rich Asians with some of the best-looking people in the world.

After arriving in Singapore, Crazy Rich Asians gets down to business: A down-to-earth young woman finds herself at sea amid Singapore's snobby, closed-minded rich. Her main adversary: Nick's mother, played with steely determination by Michelle Yeoh.

Yeoh's Eleanor Young disdains the American notion of personal fulfillment, preferring to hoist a banner of family sacrifice. She believes only fierce loyalty can elevate a family into the modern equivalent of royalty. She favors alliances, not love. In Eleanor's view, Rachel just doesn't bring enough to the table to deserve a marriage to Nick.

All that sounds serious, but the movie's issues emerge amid an ornate comic brocade that features a scene-stealing performance by rapper Awkwafina, who plays a young woman who attended college with Rachel and now lives in Singapore. Her family is well off but has yet to reach the imperial level of the Youngs. She's the sassy best friend who loves penetrating Singapore's wealthy circles but who also understands the absurdity that defines snobbery. Her character has bubble-bursting appeal.

The characters are a well-represented bunch of skin-deep socialites -- some of whom seem more interested in spending wealth than in protecting it. Nico Santos portrays a gay man with a keenly developed fashion sense. Jimmy O. Yang plays one of Nick's hard-partying pals, a guy rich enough to throw Nick's bachelor party by renting a container ship and turning it into a nightclub.

One of Nick's cousins -- Gemma Chan's Astrid -- has become successful in her own right; Astrid registers as an ambitious woman whose marriage has hit a rough patch. She and Yeoh give the movie a welcome bit of dramatic weight.

Wu makes a fine female lead and Golding, who never has acted before, looks the part. Expecting to find hard-core realism in a movie such as Crazy Rich Asians qualifies as a lost cause. Still, the movie already has been hailed as something of a landmark, the first Hollywood film with an all-Asian cast since 1993's Joy Luck Club brought author Amy Tan's novel to the screen. It's too early to say what impact the movie will have on future Hollywood production. Keep your eye on box office receipts for a clue.

At times, Crazy Rich Asians is so unashamedly shallow that you almost marvel at its chutzpah (not a Chinese word). Nowhere is this more evident than in a wedding scene in which the bride walks down a water-flooded aisle to reach the waiting bridegroom. I laughed; some of the audience at a preview screening sighed. Take your pick.

The screenplay -- credited to Peter Chiarelli and Adele Lim -- includes the requisite number of bitchy lines delivered by the women who envy Rachel's success at snagging the story's prize male. Chu hasn't neglected the reliable tropes of the rom-com formula; he embraces them and uses them to give the movie a comfortable familiarity.

Crazy Rich Asians may not be a great movie (or even a particularly good one) but watching it feels like taking that luxury vacation that the starving people of America couldn't possibly afford. Think of it as a trip to a cinematic spa in the company of some of the world's best dressed and most attractive people.