These waitresses have spunk 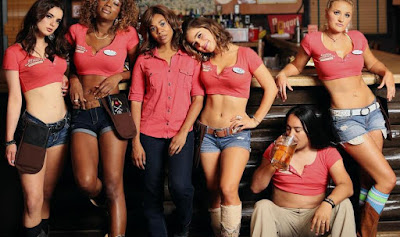 Regina Hall of Girls Trip lands a welcome leading role in Support the Girls, a comedy set in a Texas restaurant called Double Whammies. I don’t know if the two Whammies are meant to suggest boobs and butts, but the movie makes no secret of the fact that the scantily clad waitresses of Double Whammies are as much of an attraction as the burgers and brews.

Playing Lisa, the restaurant's manager, Hall functions as an exasperated mother hen who cares about the young women who work for her. Early on, Lisa organizes a car wash to pay for the defense of one of her employees, a young woman who faces legal difficulties after running over her abusive boyfriend.

A bit of sad, self-awareness underlies Hall’s performance. Older than the women who work for her, Lisa knows that she no longer can compete when it comes to turning the heads of her leering customers, a group of men that she keeps in check with a zero-tolerance policy toward harassment.

Setting the story over a single day in Lisa’s hectic life, director Andrew Bujalksi gives us plenty of atmosphere and lots of colorful characters; the spunky Maci (Haley Lu Richardson) and Danielle (Shayna McHayle) make the biggest impressions in an ensemble of cheeky (no pun intended) young actress who compose the movie's impromptu sisterhood.

If Bujalksi had been looking for an alternate title for his movie, he might have tried Lisa’s Very Bad Day. His screenplay follows Lisa through a series of catastrophes — small and large: an attempted burglary at the restaurant, an argument with her boss (James Le Gros) and an incident that suggests irreconcilable differences with her a husband (Lawrence Varnado), a guy who spends his most of his day staring at a computer screen.

Informal and sassy, Support the Girls might have looked like a pilot for a sitcom, but Bujalski obviously feels for these characters. He understands the indignities that lurk in their workplace, as well as the collegial support it takes to keep from surrendering to them.

Some of Double Whammies' customers may want to objectify the restaurant’s waitresses, but Bujalski never does. He keeps them funny without sacrificing their humanity.