A family caught in a moment of crisis 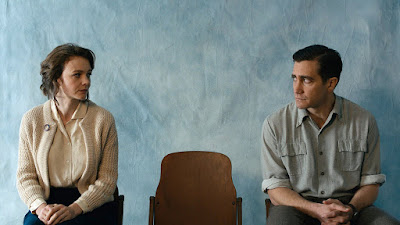 Actor Paul Dano moves behind the camera to direct Wildlife, a big-screen adaptation of a Richard Ford novel set in Great Falls, Montana, a lonely outpost where a mother (Carey Mulligan) and her son (Ed Oxenbould) have been moved by Dad (Jake Gyllenhaal), a guy who can't seem to settle into anything. The town of Great Falls marks Dad's latest stop on what seems to have been a road to nowhere. Gyllenhaal's Jerry ignites the drama, which begins in 1960, when he's fired from his job tending the greens at a local golf club. The club offers him his job back, but Jerry -- stuck in a rut created by what seem to be obscure but irrevocable principles -- refuses. Instead, he's off to fight forest fires, putting his life in danger for very little money and leaving his wife to tend to their teenage son Joe. Joe, played with just the right degree of quiet confusion by Oxenbould, tries his best to cope, taking on the uneasy role of man of the house. With Jerry off fighting fires, Mulligan's Jeanette begins what seems a willed unravelment. She takes up a relationship with Warren Miller (Bill Camp), an unlikely love interest who owns the local car dealership and whose friendliness toward young Joe wavers between sincerity and calculation. Oddly, Jeanette drags her son into the whole business, taking him to dinner at Miller's house. Could anything be more uncomfortable for a kid? The fires raging away from the town suggest a looming conflagration but the fire that rages in Mulligan's performance pushes the movie toward its sad final shot. Not always easy to read, Wildlife nonetheless entangles us in the lives of characters who defy easy definition.