A story about a world from which The Beatles have vanished mixes energetic highs with moments that show considerably less inspiration. 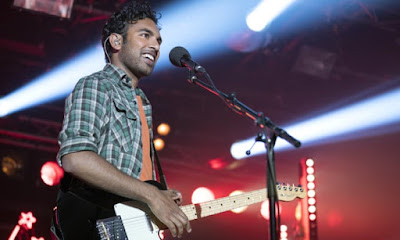 Director Danny Boyle takes a trip into Beatle world with Yesterday, a fantasy written by Richard Curtis, the screenwriter of such hits as Love Actually, Notting Hill and Four Weddings and a Funeral.

Curtis' repertoire suggests that Yesterday will be a sweet love story with a bit of wit and plenty of amiable characters. The movie almost goes the distance.

The premise is outlandish. During a global blackout, an aspiring singer (Himesh Patel) is hit by a bus. When Patel's Jack awakens, he learns that he's evidently the only person in the world who has ever heard of the Beatles or who knows any of their songs.

With his career going nowhere, Jack decides to appropriate tunes from the Beatles songbook. His friends think that he actually wrote them. Jack goes along with the ruse, and his astronomical rise begins.

Prior to Jack's ascent, he was being managed by his childhood pal (Lily James), a school teacher who might have been his only real fan. James’ Ellie also loves Jack, but he's unable to see her as anything but a friend. Tuck that away because you know that in this sometimes sugary fantasy, Ellie still will be around when the story concludes.

Joel Fry appears as Rocky, Jack's irresponsible but lovable pal, the guy who accompanies him on a journey that takes him to LA, where he prepares for the release of his first album, a recording that's supposedly going to revolutionize music as we know it.

Kate McKinnon, in a slightly overstated performance, signs on as Jack's money-grubbing, fame-hungry agent. She invites Jack to sip from what she calls "the poison chalice;" i.e., she wants him to imbibe money and fame. Jack goes along because ... well ... who wouldn't?

Ed Sheeran, a real musician, shows up to endorse Jack's talent, at one point proclaiming that Jack can out-write him when it comes to songs.

A predictable question looms: When will Jack ever fess up? Will his conscience drag him toward the moment when he must inform the world that he's not the greatest songwriter who ever lived, but a guy who's gained fame by capitalizing on someone else's work?

The money people want to market Jack as a unique talent, an obvious irony considering that Jack is really a cover artist singing Beatles’ tunes.

The Beatles' songs that Boyle includes and which Patel performs can be energetic and touching, but they're still only cover versions -- and not the real deal.

When Boyle finds the right energy, Yesterday springs to life. James does a fine version of the sweet, decent girl next door, and Patel acquits himself well enough in the musical numbers, although he's stuck playing a character who doesn't always register high on the personality scale.

The best number: Jack’s frenzied, panicky version of Help, a song that perfectly fits his mood at that moment in the story.

Given Curtis' love-struck track record and the general lightness of the material, it should surprise you that All You Need is Love will be prominently featured.

No point carping about the movie's premise about a world that never has heard of The Beatles, but what audiences may remember is that the Beatles weren't only about their music. They were also four distinct personalities who captured the world’s imagination, first as mop-topped rockers, later as serious artists and always as larger than life pop-cultural emblems, icons of their time.

I never really believed that Jack could have become such a figure. He’s got the tunes: The Beatles were more.