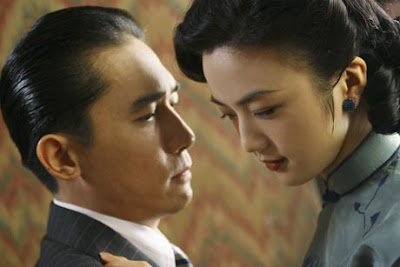 Summary: There are two levels of daring in Ang Lee's NC-17 rated "Lust, Caution." The first involves explicit sex scenes that earned the movie an NC-17 rating. The second involves the way Lee allows the story slowly to evolve, sometimes to the point where the filmmaking borders on the inert. That part of the bet never really pays off.

The best moments in Lee's long and drearily sober adaptation of a short story by Eileen Chang revolve around sex and violence. The sex scenes -- between Chinese actors Tang Wei and Tony Leung -- are supercharged in ways that elude the rest of the movie. When Leung and Tang get it on, the movie springs to vibrant life. These scenes mix tenderness, violence, anger and a lust for power in ways that fascinate, and also express the movie's complex tangle of themes. Same goes for a harrowing knife murder which, in its way, may be as disturbing as the steam-bath scene in David Cronenberg's "Eastern Promises."

Following in the wake of Lee's "Brokeback Mountain," which had its own sense of daring, the sex scenes in "Lust, Caution" certainly push the hetero envelope -- at least for mainstream movies. But Lee's exploration of the duplicities and betrayals prompted by the Japanese occupation of Shanghai doesn't begin to command attention until the final act. By then, Lee has taxed an awful lot of patience. 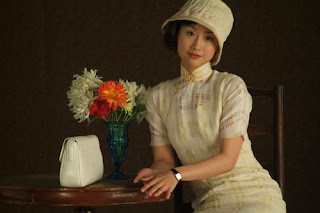 The story revolves around Tang's character, a young woman who escapes to Hong Kong after the Japanese invade Shanghai. As a student actress, she's recruited by a group of fellow actors to return to Shanghai. They believe that theater can play a role in encouraging the Chinese people to revolt against their Japanese tormentors. Eventually, these same arty rebels decide that assassination might be a more effective form of protest than three-act melodrama. They conceive a plot in which Tang's character will seduce a Chinese diplomat (Leung) who has been collaborating with the Japanese. Once she has him under her spell, he'll be killed.

Screenwriters Wang Hui Ling and James Shamus succeed in bringing Tang's character to life. She's an innocent who learns how to act her way through seismic historical upheavals. In a sense, the entire movie can be viewed as a treatise about the art of performance -- on and off-stage. "Lust, Caution" blurs the distinction between on- and off-stage acting, turning into a lengthy study of the dangerous art of role playing. Credit the gifted Tang with plumbing the depths of a character whose ability to perform takes her to unexpected places.

Despite the presence of many tantalizing ingredients, Lee's movie, which clocks in at two hours and 28 minutes, too often suffers from narrative torpor. "Lust, Caution" takes too long to grip the screen. If only Lee's long-simmering buildup had half the fire of the sex scenes.
Posted by Robert Denerstein at 8:49 AM