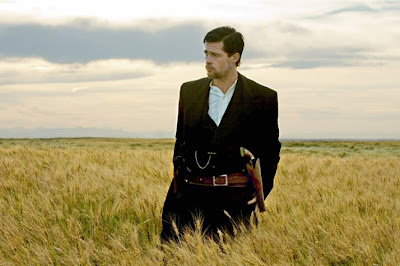 Summary: "The Assassination of Jesse James by the Coward Robert Ford" finally creeps into Denver after a trot across the fall festival circuit and openings on both coasts. The movie, which features fine acting from Brad Pitt (as Jesse) and Casey Affleck (as Robert Ford) proves a mixed bag of lyrical gestures and droning narrative. The result -- unlike the vicious and deadly Jesse -- can be hit and miss.

This big-screen adaptation of Ron Hansen's much-admired 1983 historical novel has been hailed in some quarters as a masterpiece and booed in others as an insufferable bore. The truth, as usual, lies somewhere between the two extremes. The movie centers on the twisted relationship between James, played with quiet charm and quicksilver ferocity by Pitt, and his eventual assassin (Affleck), a man whose hero worship curdles as the movie progresses.

After James' death, Ford became a celebrity, which is what he wanted, but he couldn't enjoy his fame. Ford, who shot Jesse in the back, became known as the man who murdered a folk hero. The movie nicely demonstrates how quickly American culture turns action into unseemly expressions of kitsch. Ford tried to cash in on his on notoriety by reenacting the assassination on the New York stage.

Director Andrew Dominik ("Chopper") clearly -- but often tediously -- explores the strange relationship between an idol and the man who worshiped at his feet. Dominik may have been trying for leisurely immersion, but at two hours and 40 minutes, the movie begins to play like a series of beautifully crafted longueurs.

Still, it would be a mistake entirely to dismiss the movie. "The Assassination of Jesse James" doesn't make its home inside cold reality anymore than "The Godfather" takes root in the real-life world of gangsters. Dominik's movie springs from an imaginative zone informed by other movies. Many reviewers have pointed out resemblances to the work of Terrence Malick or Robert Altman, notably in "McCabe and Mrs. Miller." They're right to do so. The winds of '70s filmmaking do blow through the movie.

Maybe that's why "The Assassination of Jesse James" seems more like a dream about a fabled outlaw than a movie about him. The movie can feel as distant as the sight of a lone rider on a far horizon. By the time it gets close enough for involvement, you may already have lost interest.
Posted by Robert Denerstein at 1:00 PM

The family of Jesse James posted its own review of the film to their family web site, Stray Leaves, together with stories of the James family's previous experiences with the film industry.
www.ericjames.org/Reviews/
AssassinationofJesseJames/index.html