The broken life of a born fixer

Summary: "Michael Clayton" is the kind of mainstream movie that Hollywood should be turning out by the carload. It's smart, involving, well acted and meaningful enough to knock the story off its surface. But these days, movies such as "Michael Clayton" are the exception rather than the rule. More's the pity.

Begin with George Clooney, who's perfectly cast as Michael Clayton, a lawyer for a major New York firm. Michael's a fixer, the kind of guy who cleans up other people's messes. He's a no-frills realist who has little tolerance for fancy talk. Michael brings a lower-middle-class pedigree into the world of high-powered corporate law, where most of the attorneys probably attended Ivy League law schools. Michael graduated from St. John's and then attended Fordham Law. His colleagues have become excessively dependent on him. He does the dirty work that allows others to imagine that their hands are clean.

Not that Michael lacks for problems of his own. Because his drug-addicted brother convinced him to invest in an upscale restaurant that went belly up, Michael now owes $75,000. He once gambled too much. He's divorced. To make matters worse, Michael is one of those characters who's cursed with self-awareness. He refers to himself as a "janitor," and he's sick of playing the role. Trouble is he's good at it, so good that his boss (Sydney Pollack) won't let him expand into other activities. 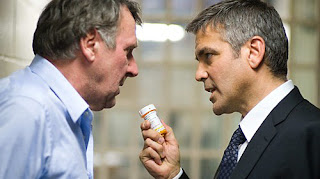 All of this provides the backdrop for a thriller about a corpora-tion that knowingly sold a cancer-causing pesticide. Michael's firm represents the company in a class action suit brought by the relatives of those who were harmed. And here's the twist: The firm's brilliant but mentally unstable lawyer has gone off his medication and decided that he no longer wants to carry the banner for the bad guys. Arthur Edens (a terrific Tom Wilkinson) has become a loose cannon. Arthur may even be aiding the plaintiffs that he's been fighting for six years.

As for the corporation, it's not without its own heavyweight players, notably a corporate counsel (Tilda Swinton) who rehearses her every move. In one of the movie's many nice touches, Swinton practices for an interview with a business journalist in front of a mirror. In a small performance, Swinton creates a woman whose toughness can't entirely mask ripples of insecurity.

Densely plotted without being confusing, "Michael Clayton" was written and directed by Tony Gilroy, whi also wrote the screenplays for three Bourne movies. Gilroy keeps the pacing brisk, and gives the film a suitably polished look. He also knows how to walk up to a big scene and grab it by the throat. When Michael confronts Arthur in a Manhattan alley, Clooney and Wilkinson go toe-to-toe. Michael tries to save a friend from ruin. Crazy as he may be, Arthur still makes it clear that he knows how to find an opponent's jugular. 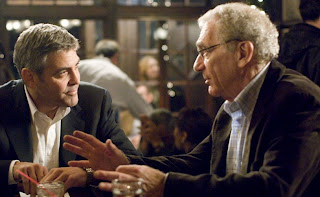 Pollack also has been perfectly cast. No one's better at portraying one of the smartest guys in any room. Untroubled by ethical concerns, Pollack's Marty runs a law firm that bills big and doesn't particularly care whether it's pointed in a morally acceptable direction.

Interestingly, "Michael Clayton" opens (at least in Denver) in the same week as "Darjeeling Express," a movie that tries to turn lack of vigor into a virtue. It also goes up against "The Assassination of Jesse James," which surrounds violence with lyricism as it contemplates hero worship -- and then, at two hours and 40 minutes, contemplates it some more.

"Michael Clayton" is another kind of movie, a solid and savvy piece of entertainment. As I said at the outset, I wish there were more of them.
Posted by Robert Denerstein at 12:00 AM