Bickering brothers on the road in India 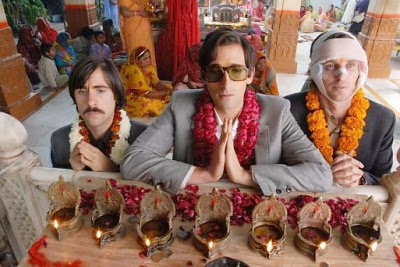 Summary: Not entirely successful, "Darjeeling Limited" nonetheless qualifies as a revealing look at a generation that can maintain its self-absorption under almost any conditions.

Director Wes Anderson traveled to India to make "Darjeeling Limited," but, like the characters in his movie, he seems to have difficulty escaping himself. You'll recognize the style that manages to feel relaxed and rigid at the same time, and you'll notice that Anderson still tends to make us think that his eye has drifted off target. "Darjeeling Limited" also has a slightly insular feel with characters shielding themselves behind thick walls of neurosis and delusion.

The story, from a screenplay by Jason Schartzman and Roman Coppola, focuses on three brothers who reunite in India. The bossy older brother (Owen Wilson) constantly badgers his younger siblings (Adrien Brody and Schwartzman) into making agreements. It's like an older kid at an amusement park constantly telling his younger siblings, "Look, if anyone gets lost, we'll meet up at the Ferris wheel."

As it happens, Wilson's Francis has just been in a motorcycle accident. This means Wilson spends the entire movie with his head bandaged, almost in full mummy fashion. Brody's Peter, we learn, is married and about to become a father, which raises an obvious question: Why isn't he at home with his pregnant wife? Schwartzman's Jack evidently remains hung up on a woman.

If you want a little more background, head for your computer. Although it's not playing with the feature, the movie is best appreciated when preceded by a short called Hotel Chevalier, which provides some of Jack's backstory. The short, which you'll find on iTunes, involves a meeting between Jack and his former girlfriend (Natalie Portman) in a Paris hotel room.

In India, the brothers bicker, take a variety of pain-killing narcotics and recreate childhood relationships that rely on secrets and barely suppressed hostilities. The cramped train compartment in which the brothers travel functions like a stage set for a drama about the impossibility of finding deep meaning. The movie might be called Pinteresque -- only it's filtered through a sensibility that doesn't seem alarmed by the absurdity of things.

So what happens? Schwarztman's Jack has an affair with a train stewardess (the lushly beautiful Amara Karan). The brothers visit a temple or two. Peter buys a cobra in a marketplace. The brothers get crosswise with the train's steward (Waris Ahluwalia). He eventually boots them off the train, and they're forced to confront Indian realities. During an attempt to rescue three drowning boys, one of the kids dies. Perhaps for the first time, the brothers see past their own myopia. It's a little obvious, but life (along with its inevitable consequence, death) intrudes upon them.

The brothers travel through India with 11 cumbersome pieces of Louis Vuitton luggage. We know they're also burdened by other kinds of baggage, including the recent death of their father and the disappearing act that their wandering mother has perfected throughout the years. As it turns out, their mother (Anjelica Huston) now lives as a Catholic nun in a convent at the foot of the Himalayas, the trip's real destination. Don't look for similarities to Mother Theresa. In a brief appearance, Huston makes it clear that she's playing a willful woman who probably wasn't a superior mother.

Anderson ("The Royal Tannenbaums") seems to love films with dog-eared looseness, and his films certainly don't look like anyone else's. But I've long wondered whether there isn't something missing from all of them. Like the characters in "Darjeeling," Anderson's movies can feel strangely disconnected. Maybe that's why I rode the train, got off and resumed my day, feeling neither ripped off nor totally rewarded.


Who Owns the Night? Why, director James Gray, of course.

In "We Own the Night," director James Gray demonstrates that he's capable of strong filmmaking. Gray stages an exciting car chase in the rain, and deftly captures the pulsating energy of the disco-dominated '80s. But Gray's schematic story about two brothers -- one a cop, the other an ally to drug dealers -- has a reach that well exceeds its grasp.

Despite fine work from Joaquin Phoenix (as the bad brother), Mark Wahlberg (as the cop brother) and Robert Duvall (as their police chief father), the movie -- another Brooklyn story populated by hard-boiled Russian gangsters -- can't convince us that its story chews on anything more substantial than "B" movie gristle.
Posted by Robert Denerstein at 11:12 PM