One that's ultra-serious; another that's not

Summary: In "Reservation Road," Mark Ruffalo and Joaquin Phoenix travel a road marked by grief, rage and failure. In the end, they don't really get anywhere. In "Dan In Real Life," Steve Carell travels another road, one that's being billed as "real life," a description that fits only if you believe real life resembles a sitcom.

LOTS OF RESERVATIONS ABOUT THIS ROAD 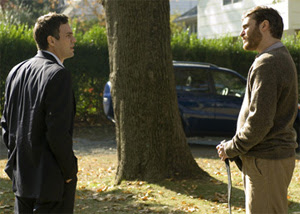 Coincidence builds upon contrivance in ways that finally crush credibility in "Reservation Road," an overstuffed drama that proves beyond salvage, even with help from two fine actors, Mark Ruffalo and Joaquin Phoenix. Ruffalo plays Dwight Arno, an attorney who kills a 10-year-old boy in a hit-and-run accident. Through a series of plot twists, Arno, who's also a dad, becomes involved with the dead boy's father (Phoenix). Mired in grief and brooding with rage, "Reservation Road" explores issues of responsibility and fatherhood, and if it the script hadn't relied on an extraordinary coincidence, it might have done better at putting us through a wringer of escalating moral choices. As it stands, director Terry George ("Hotel Rawanda") builds toward an overwrought finale in which Phoenix's character, believing he has been denied justice, takes the well-traveled road toward revenge.

IS DAN'S LIFE REAL OR JUST ANOTHER SITCOM? 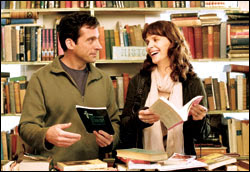 "Dan In Real Life" has just about everything needed to make it a general-audience hit: a big and mostly happy family, a chaste romance (between Steve Carell and French actress Juliette Binoche), a few earned laughs and an implausibly happy ending. In short, hardly a minute of it feels believable.

Director Peter Hedges ("Pieces of April") telegraphs almost all his moves as he tells the story of Dan Burns, a widower (Carell) who travels with his three daughters to a family reunion in Rhode Island. Dan's daughters are having sitcom-style problems, and he's lonely after four years of widowhood. On a trip to a local bookstore, he meets Binoche's character, and instantly falls for her.

Enter the BIG COMPLICATION: Binoche's Marie is dating Dan's brother (Dane Cook). She's about to arrive at the home of Dan's parents, where she's supposed to meet the family. Dan only learns of this when his new dream girl shows up and is introduced as his brother's potential fiancee. After that, Dan and Marie try to avoid one another, and Hedges blends equal amounts of comedy and drama into a genre that might be well be dubbed "unromantic uncomedy," neither funny nor romantic enough.

Carell and Binoche do well, although they don't really generate much chemistry, and the supporting cast does its best to make the movie feel populated. Dianne Wiest and John Mahoney do nice work as Dan's parents, and Emily Brunt plays a woman who goes on an arranged date with Dan, mostly so that she can round out the plot when called upon.

Truth is, I closed my notebook about three-quarters of the way through "Dan in Real Life" because I got tired of tracking the number of times I winced or groaned. And, no, I'm not a hater. I liked Peter Hedges' "Pieces of April," a movie in which he perfectly balanced comedy, depth and (heaven help us) quirkiness. This time, Hedges swings and misses.

I saw "Dan In Real Life" at a paid sneak on a Saturday night, and, aside from a few laughs, found myself wishing I'd stayed home to watch the Red Sox beat the Cleveland Indians en route to the American League pennant.
Posted by Robert Denerstein at 9:10 AM

How about some suggestions about what to see at the Denver film festival this year?