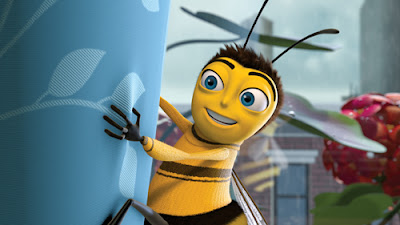 Summary: It can be talky, but "Bee Movie" boasts stunning animation, and its script sustains an amusing enough buzz.

Jerry Seinfeld seems to have devoted lots energy to bringing "Bee Movie" to the screen, and the gamble mostly pays off. Seinfeld gives voice to Barry B. Benson, a bee that graduates from college only to discover that he faces a life of drudgery in a massive honey factory run by the Honex Corporation.

What's this? Social satire in an animated feature? Yeah, it surprised me, too, but there it was with Seinfeld turning out a tale of a bee who yearns for adventure outside his Central Park hive. In pursuit of his dream, Barry joins with a robust squad of Pollen Jocks, and heads into the streets of New York City for a sequence that constitutes one of the best animated bits of the year, a dizzying flight through Manhattan.

The script wisely avoids a glut of secondary characters. En route to the rest the story, Barry meets the savvy Mooseblood (Chris Rock), a mosquito who understands the perils of a bug's life. But rather than dwelling on Rock's character, the script pushes Barry into the human world where he meets and develops a mild crush on Vanessa Bloome (Renee Zellweger). Why not? She's a florist.

This being a Seinfeld creation, ethnic humor inevitably works its way into the mix. Back at the hive, Barry's parents fret that Vanessa's not "Bee-ish," but are relieved to learn she's not a WASP.

Barry eventually joins forces with Vanessa to sue major honey producers for failing to compensate bees for their hard work, and the plot -- concocted by Seinfeld and several co-writers -- attempts to teach a loopy lesson in ecology.

"Bee Movie" doesn't always make sense, and its story tends to be skimpy, but the movie manages to prove diverting anyway. And if Seinfeld can't always keep the proceedings fall-down funny, he has been smart enough to team with animators who ensure that "Bee Movie" maintains its visual pop.

No point bee-laboring. "Bee Movie" may be satirical and it may have a message, but it's packaged in a mild style that's never less than palatable. Despite its title, "Bee Movie" is more inclined to float like a butterfly than sting like a ....well...you know what.
Posted by Robert Denerstein at 4:00 PM