Did she or didn't she? 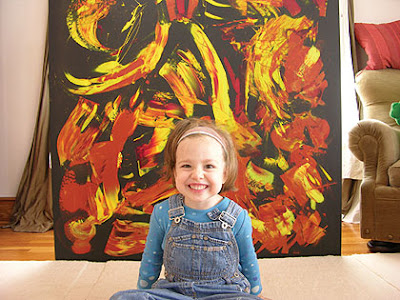 Summary: Can a four-year-old paint a masterpiece? A fascinating new documentary will have you wondering.

When I saw “My Kid Could Paint That” at January’s Sundance Film Festival, I kept hoping I’d run into someone else who’d seen the movie. I really wanted to talk about a documentary that, quite frankly, left me unsure what to conclude. As it turned out, vagaries of scheduling kept anyone in my immediate crowd from getting to Amir Bar-Lev’s film about a 4-year-old Marla Olmstead, who attracted tons of media attention when she was proclaimed an art genius. That's right. She was four.

Olmstead, whose story has been well chronicled elsewhere, was first hailed as a prodigy, and many of those who wrote about her did so in the kind of glowing terms usually reserved for the world of once-in-a-lifetime and too-good-to-be true. Then, as its wont to do, the media tide shifted. A skeptical “60 Minutes” piece created doubt. Had Marla really done those paintings without help? Maybe her father had guided her hand.

Whatever the truth of the situation, Olmstead’s story remains amazing, not only for what it says about her family, but for what it says about the art world and about the inexplicable nature of talent. At four years of age, Marla was selling paintings for as much as $25,000. And many of those paintings were quite good. Those who reflexively dismiss modern art might not see the merit in Olmstead’s work, but her paintings exhibit raw vitality and an explosive color sense that seems way beyond the average kid’s capabilities. 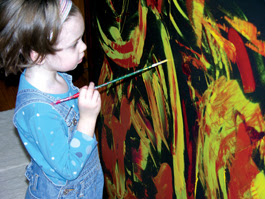 "My Kid Could Paint That" is also one of those films in which the filmmaker becomes part of the film. Bar-Lev was smack in the middle of telling Olmstead’s story when the focus of his film changed. Suggestions that Marla might not have been able to make her paintings without help began to dominate Bar-Lev’s inquiry, creating extraordinary tensions between the director and his subjects, most notably with Marla’s mother, Laura, who seems a likable and conscientious mom.

On top of that our perception of some of the film’s characters changes, as well. We learn that Anthony Brunelli, who owns the gallery where much of Olmstead’s work has been displayed, is a realistic painter of painstaking exactitude and without much respect for abstract art. Could he have had some involvement in perpetuating an elaborate goof on the art world?

Although the film arrives at no hard conclusions, it raises fascinating questions about talent, the public's perception of artists and the role of intention in making art. So, see this highly involving documentary, but go with someone. “My Kid Could Paint That” is a film you’ll want to talk about.

If you're interested in seeing more of Marla's work, you can check out her heavy -duty web site. The kid may be the real deal, and so evidently are the people who market her.
Posted by Robert Denerstein at 10:42 PM