'Another Earth' is another kind of movie 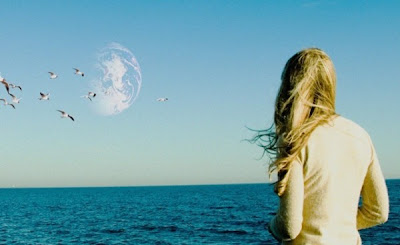 Imagine waking up one day to discover another Earth hovering in the sky above the Earth you already inhabit. You'd check the papers and the TV, and you'd begin to learn something about this strange occurrence, but its mystery never entirely could be solved until someone sent a spaceship to inspect what appears to be a bizarre new addition to the solar system.

If all this sounds like the introduction to the review of a reasonably standard helping of science fiction, think again. Another Earth may have a sci-fi backdrop, but the movie is also a moving exploration of guilt, responsibility and redemption.

Another Earth begins with 17-year-old Rhoda (Brit Marling) celebrating her admittance to MIT. On the way home from a party, Rhoda -- a little tipsy from alcohol -- becomes involved in a fatal accident that kills a mother and her child, leaving her husband alive.

Four years pass, and Rhoda is released from prison, where she served time for her alcohol-influenced accident. Having apparently abandoned all ambition, Rhoda lands a job as a janitor at a school. She lives at home with her parents.

Without quite understanding why, Rhoda shows up to offer cleaning services to the husband (William Mapother) who survived the accident, a man who now lives a life of slovenly reclusion. Of course, he doesn't know who Rhoda is, and she doesn't tell him. Will she ever come clean?

As we wait for an answer, Rhoda and Mapother's John slowly develop a relationship. He starts to break down self-imposed walls of isolation and grief; she begins to allow herself to feel again -- and, oh yes, that other Earth still hangs in the sky, suggesting all sorts of metaphorical possibilities.

Eventually, we learn, this other Earth represents an alternate reality of some kind, which is about all I'll say about it here.

Director Mike Cahill, who wrote the screenplay with Marling, effectively unites two genres -- speculative sci-fi and sorrowful drama -- in ways that move the movie beyond gimmickry. Another Earth emerges as one of the year's more provocative achievements, a movie that realizes that the most difficult thing most of us ever will have to confront is ourselves.

Posted by Robert Denerstein at 11:15 AM