Do these characters really have a future?

Miranda July's second movie charts a story about lives on the road to nowhere. 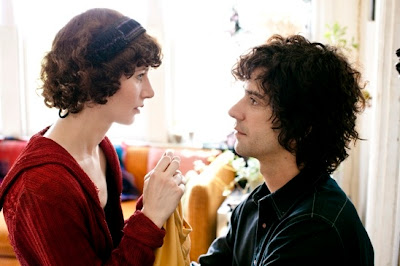 While watching Miranda July's latest movie -- The Future -- I reached the perplexing conclusion that it's possible to be interested in a film and a little bored by it at the same time -- and in roughly the same measure.

I was a major fan of July's Me, You and Everybody We Know, a debut movie that brought an original talent to the screen. But July's sophomore effort is by turns too quirky and too deadpan, as idiosyncratic as its predecessor, but less engaging.

Never fear: Sophie and Jason have a plan that requires them to make a major commitment. They commit to adopting a cat. They discuss the pending addition to their household with the same seriousness that another couple might bring to a discussion about adopting a child.

As it turns out, the cat -- Paw Paw by name -- speaks, a device that allows July to lend her voice to a running narrative and also adds strange poignancy to the proceedings. Paw Paw has only six months to live, but must wait a month before being allowed to leave the animal shelter.

Meanwhile, attempts at transformation ensue. Sophie, who teaches dance to children, makes a strange dance video. Jason, who earns his keep by answering calls on a computer help line, quits his job and begins working as a door-to-door solicitor for environmental causes.

Obviously, plot is not July's strong point. To the extent that there is a story, it involves an affair Sophie eventually begins with Marshall (David Warshofsky), a sign painter. Is she desperately looking for signs of life in her tapped out existence?

You may not care because July seems more interested in illustrating a condition than in explaining it. The Future isn't a drama; it isn't a comedy; it's a description -- albeit one that can be quietly clever.

Too creative to make a totally boring movie, July includes interesting touches throughout, but The Future can feel like moviemaking under glass; its whimsy, undermined by July's arty, often self-conscious remoteness. I admire July's talent, but this time I found myself wishing she could learn to wink.