A well-acted thriller that raises complex issues of conscience. 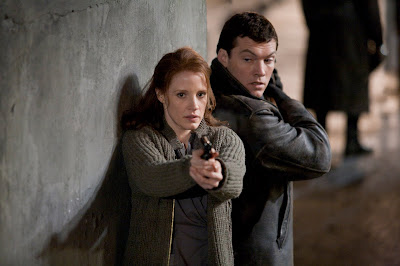 Labor Day approaches. Summer wanes. As you no doubt already know, sifting through the late summer releases can feel a bit like trying to drain the dregs from a once-full keg. Much of the fizz is gone, and the fall - generally regarded as the season for first-class movie entertainment - beckons.

In my market, neither Apollo 18 nor Shark Night 3D were screened in advance for critics, usually not a good sign. Given that, it's probably safe to bet that the week's best new movie will be The Debt, a brisk remake of a 2007 Israeli thriller that raised disturbing ethical questions while maintaining high levels of tension.

The story focuses on three Israeli members of the Mossad who long have been lauded for capturing and killing Dieter Vogel, a.k.a. the infamous Surgeon of Birkenau, a Nazi doctor in the ultra-perverse Josef Mengele mode.

The Debt looks at this trio during the 1965 capture of Vogel in East Berlin and in 1997, after the Mossad agents have become national heroes in Israel. Helen Mirren, Ciaran Hinds and Tom Wilkinson -- a powerhouse trio -- play the agents in the 1997 segments.

The 1965 versions of these same characters are portrayed by Jessica Chastain (recently seen in The Help), David Worthington (familiar from Avatar) and Marton Csokas, from a couple of The Lord of the Rings movies.

No fair revealing more about the plot except to say that Madden infuses the 1965 scenes with precisely the right amount of intrigue and tension.

Having the same characters played by different actors can be problematic, raising issues that have more to do with appearances than with performance. As the action shifts between 1965 and 1997, you may find yourself a bit distracted by questions. Could someone who looks like Mirren plausibly have developed from a character who looks like the one Chastain plays? Same goes for the male characters.

None of this is to say that The Debt isn't an involving look at characters who must wrestle with terrible issues of conscience. Conscience. of course, hardly represents a problem for the so-called Surgeon of Birkenau (Jesper Christensen). He's precisely the sadist you'd expect, and all the scarier for it.

The movie 's complicated issues are suggested from the start. We quickly learn that Mirren's Rachel Singer has a grown daughter who has written a book that has brought back a flood of memories and fears about the Vogel affair.

Madden does a good job detailing the evolving personal dynamics among the three youthful Mossad agents. And, yes, a love triangle develops.

The actors in all of the movie's phases hit the right notes, and The Debt emerges as a thriller that remains deftly mounted and smartly written - perhaps until the very end.

Still, in a dry season, The Debt may be as good as it gets.