Vampires in suburbia? Why not? They seem to be everywhere else these days. 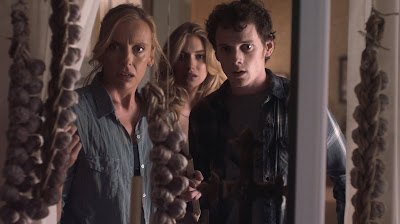 Did we really need a remake of a 1985 vampire movie, even one that has a bit of a cult following? Probably not, but the 2011 edition of Fright Night isn't as awful as you might expect.

But before we get to that, a word on my mood. The 3-D glasses made my heart sink. They were handed to me on arrival at a preview screening of Fright Night. Look, I’m sick of 3-D, and honesty compels me to confess that I was only marginally interested in a Fright Night remake to begin with.

Still, two of the movie's actors gave me hope that this spiffed-up remake might constitute a late summer surprise: Colin Farrell, who’s capable of delivering fine off-kilter performances, and Toni Collette, the gifted Australian actress who we haven't seen in while.

Neither Farrell nor Collette kept my hopes alive for the movie's entire 101-minute run time, but Farrell gives it his best shot as a vicious vampire living in the suburbs of Las Vegas. He creates a villain who's more of an unapologetic killing machine than a sophisticated creature of the night. Think of Farrell's Jerry (yes, there's a joke about a vampire with such a commonplace name) as the Stanley Kowalski of vampires, and you're on the right track.

In the era of Twilight and True Blood, it takes a certain amount of nerve -- maybe even gall -- to attempt to draw box-office blood with yet another vampire movie. Perhaps the filmmakers – led by director Craig Gillespie (Lars and the Real Girl) -- thought they could add something worthy to the already bulging vampire vault by setting the story in a time of depleted economic hope and housing catastrophe.

Given the current economic climate, it's hardly shocking that many of the tract homes in the movie's suburban setting have long been vacant. So there's an air of anticipation when someone finally moves next door to Yelchin's Charley Brewster. The new guy (Farrell) even flirts with Charley's single mom (Collette). Of course, there's no mystery about the fact that this new neighbor poses an imminent threat.

After some initial resistance, Charley finally realizes that Jerry is a vampire -- and a particularly ruthless one at that. The catch: No one believes Charley.

As the story develops, we meet additional characters in Charley's life. Christopher Mintz-Plasse (familiar from Superbad and Kick-Ass) shows up as one of Charley's long-time buddies, a friendship the image-conscious Charley tries to jettison because Mintz-Plasse's Ed is a bit of a geek. Imogen Poots portrays Charley's girlfriend. And, yes, typical high school dynamics such as jealousy and the desire to be cool underlie some of the movie's teen antics.

David Tennant plays the role that puts a dose of comic zip into the proceedings. He's Peter Vincent, a Las Vegas performer who pretends to know something about killing vampires, and ultimately is asked to help put one away, a task that would be easier if Vincent weren't also a debauched drunk.

No point belaboring this one, except to say that the filmmakers are moderately successful at rousing these vampires from the Hollywood crypt. A few amusing lines, a few jolts, a sometimes playful approach to the genre, and a deliciously pointed method for vampire killing should be sufficient to keep fans happy, although I wouldn't say that Fright Night constitutes a major addition to a genre that's as difficult to kill off as ... well ... the average vampire.

I'm hoping that the same can't be said of 3-D, which seems equally resistant to all critical efforts to drive a stake through its heart.

Posted by Robert Denerstein at 6:00 AM