Made for each other, but not for us

A pretty standard romance -- but with a British accent. 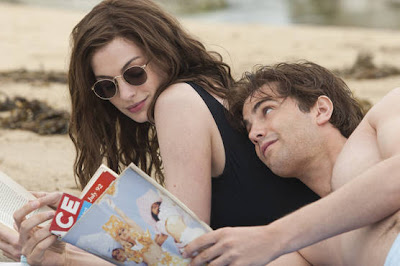 He's a bit of a jerk. She's not. They meet on the evening of their graduation from college, and stay connected throughout most of their post-collegiate lives. As time passes, he becomes even more of a jerk. She's still reasonably nice. And we know from the outset of One Day that both he and she would be happier if they came to their senses and hooked up.

Based on a novel by David Nicholls, who also wrote the screenplay, One Day stars Anne Hathaway as Emma, an aspiring writer who works as a waitress. Jim Sturgess portrays Dexter, a guy who winds up hosting a TV show before his career (and his life) hit the skids. He's a callow, selfish womanizer who matures into an increasingly dissolute -- if more experienced -- womanizer, the sort of character we once might have expected Hugh Grant to play.

The movie charts the lives of the couple that's not really a couple on one day -- July 15 -- over the course of a couple of decades. Dexter busily indulges his libido, although he does wind up in a serious -- if ill-fated -- relationship. Emma takes up with Ian, played by Rafe Spall, son of the gifted Timothy Spall. It's immediately clear to us that Ian never will make it as the stand-up comic he hopes to be. And we also know that Emma and Ian won't make it as a couple, either. Guys like Ian don't wind up with characters played by Anne Hathaway -- at least not in movies.

Emma and Dexter probably are no less interesting than lots of other big-screen characters, but director Lone Scherfig -- who broke onto the international scene with Italian for Beginners (2000) and who earned acclaim for 2009's An Education -- has made a movie of less-than-fascinating detours en route to what -- even with a surprise twist -- seems inevitable and not especially satisfying.

Posted by Robert Denerstein at 7:00 PM