An irrepressible Irish cop with a highly variable approach to morality. 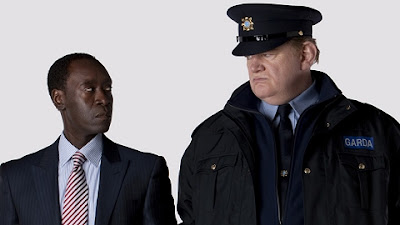 Brendan Gleeson plays a shiftless but astute Irish cop in The Guard, an enjoyable crime yarn set in a part of Ireland where the brogues are as thick as mud. I’m not saying The Guard tells a great story or anything like it. I am saying that Gleeson’s Gerry Boyle is one of those characters that can make an entire movie – and in this case, pretty much does.

Boyle, a cop whose moral compass spins in many directions, becomes involved in an attempt to thwart a drug-smuggling ring that's being pursued by a visiting FBI agent (Don Cheadle). Cheadle’s Wendell Everett takes a fair amount of abuse from Boyle, who even goes so far as to suggest that he might be a raving racist. Actually, he’s not a racist nor is he raving; he’s just the kind of guy who likes to push people’s buttons, maybe to determine what they’re made of or maybe to demonstrate that he couldn't give a hoot about anything that smacks of political correctness.

Boyle and Everett become unlikely partners in an investigation into a gang (Liam Cunningham, David Wilmot and Mark Strong) that's about to make a big drug delivery. The two cops bicker like the odd couple they are, and it falls to Everett to utter the movie’s signature line. Riding in a car with Boyle, he admits that he can’t determine whether Boyle’s really smart or really dumb. We know instantly that Boyle wants to keep it that way.

Whatever the case, Boyle is not your standard-issue lawman. He's profane; he cavorts with hookers -- two at a time; he consoles the Croatian widow of a fallen colleague; and pays regular visits to his aging and ailing mother (Fionnula Flanagan).

Gleeson seems to be having a jolly old time, and The Guard winds up providing a fair measure of enjoyment. Credit director John Michael McDonagh – the brother of Martin McDonagh, who directed Gleeson in 2008’s In Bruges – for knowing how to get the most out of his cast. That said, The Guard never ceases to be Gleeson’s movie. McDonagh and the other actors are smart enough not to try to take it away from him.

Posted by Robert Denerstein at 10:15 AM