A comedy that sharpens to a pointed edge 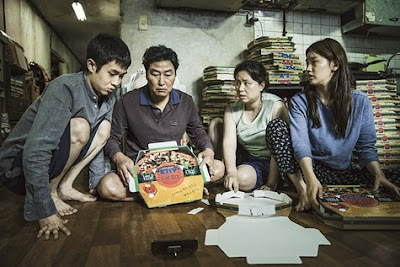 A good portion of Parasite — director Bong Joon-ho's biting look at South Korean’s class divide — plays like a comedy with farcical flourishes. But if you know the work of Bong (Okja, Snowpiercer, The Host, and Memories of Murder), you also know the movie will take some unsettling turns.

In outline, the story seems simple: One-by-one, a poor family insinuates itself into the life of a wealthy family.

The tale begins when poor young Kim Kai Woo (Choi Woo-sik) is asked by a wealthy pal to pose as an English tutor for an affluent college-bound girl. Kim quickly senses a larger opportunity. Not only will he find a job for himself, but he'll see that his whole family lands work with the same wealthy family. Full employment represents a marked step up for a group that dwells in a miserable basement apartment, earning what passes for a living folding pizza boxes.

As it turns out, Kim's family members are all good actors. They never tell their employers that they’re related to one another and they play their roles with incredible ease. During the course of the story, Dad (Song Kang-ho) becomes a chauffeur; Mom (Jang Hye-im, a housekeeper; and the family’s daughter (Park So-dam), an art-therapist for the affluent family’s young, unruly son, a kid who spends most of his time pretending he's in a western. He fires rubber arrows at any available target.

As the first person to penetrate the world of the wealthy, Kim is both a hustler and an insecure kid who eventually must come to grips with the fact that he’s playing a role. He’s giving a performance. But what’s underneath the role he’s playing? And will he be able to turn that role into something real?

Much of the story takes place in a beautifully modern home that stands as a fortress of contemporary design. It’s amusing to watch the poor family play at being servile. And it’s equally funny to see how the affluent family responds.

The aspiring college student begins to fall for her new English tutor. A study in bourgeois nervousness, Mom (Jo Yeo-jeong) seems oblivious to anything beyond her well-insulated world. Dad (Lee Sun-kyun) runs his tech business while insisting that a good servant knows how to be friendly without ever crossing the line that suggests he or she might be equal to his or her employer. We’ve seen the type before: Dad believes that his success makes him superior to those around him. We guess that he's new to money.

Of course, plenty of issues bubble beneath the film’s comic surface. But what are those issues and how will they finally play out?

I’m not going to provide spoilers here, which puts a real burden on any review because it’s natural to want to talk about the way that Bong brings his movie to its explosive boil.

Still, it seems fair to say that Parasite poses an intriguing question: What happens when those who’ve been pretending start cracking under the strain? And how do those with power, money, and status react when addressed not as employers but as human beings?

I won’t say more, but pay attention to the way Bong plays with the notion of how reality can be projected on screens. The poor family lives in a basement with a window that resembles a movie screen. Through it, they watch the life of their neighborhood unfold in miniature. A drunk insists on urinating against a wall. The family recoils in disgust. The family’s only guests are hordes of stink bugs.

And then there’s the wall-length window in the home of the wealthy family. It, too, resembles a movie screen and Bong shifts our view depending on who’s looking out of or into that window.

Gradually, what appears to be an amusing but relatively safe screwball comedy turns out to be anything but.

Parasite plumbs the depths of class divisions and personal delusion, as well as the fragility of a social order that seems secure.

At times, Parasite can feel like other movies, maybe even one beckoning for an American remake. But be wary. Bong’s not playing around — at least not all the time. When you revisit the movie in your mind, you may see more sadness and serious than you initially would have expected.