Eddie Murphy's 'Dolemite is My Name' 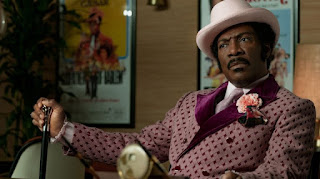 There's nothing particularly novel about Dolemite is My Name, Eddie Murphy's unabashed tribute to Rudy Ray Moore, a real-life comedian in the 1970s tried to make a splash with his own version of a Blaxploitation film.

Before his foray into the film world, Moore invented a character called Dolemite, a fast-talker who dressed like a pimp, sported a globe-sized Afro wig, and used a cane as a prop.

In Moore, Murphy finds a character whose "crazy" ambition (Moore financed Dolemite with borrowed money) can't mask the fact that he’s basically a good guy. And Murphy gets laughs in ways that incorporate his fondness for the bygone era that produced such movies as Shaft and Super Fly.

Early on, Moore — who gets the idea for his act by talking to a homeless man with a gift for turning a phrase — works the Chitlin Circuit. He connects with audiences through what might be considered an early version of rap. He's finds his niche.

Keegan Michael-Key portrays the movie's writer, a guy who thinks he has written a socially significant screenplay. Craig Robinson and Mike Epps sign on as part of Moore's crew.

Snoop Dogg does cameo duty as Murphy walks down the pop-cultural memory lane of his youth and also reminds us that there was a time when nothing could validate a show-business career like a movie. Murphy, who hasn't made a movie in a while but whose career needs no validation, holds the screen with ease, even though Dolemite operates mostly at B-movie levels.

Dolemite opens in limited markets Oct. 4 and will be available on Netflix starting Oct. 25. I’m sorry that the movie won't be playing in theaters everywhere because Murphy has made a film that only can benefit from being seen with an audience that's looking for a good time.