The dark world of "The Lighthouse" 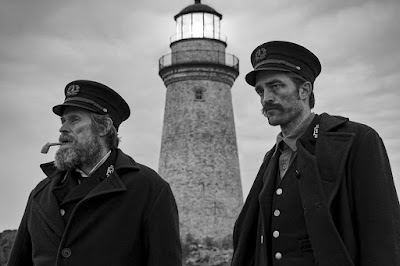 Filmed in black-and-white and locked in a claustrophobic square image that makes the frame seem like a prison cell, director Robert Eggers's The Lighthouse qualifies as one of the year’s weirdest movies.

The set-up is as spare as a picked over bone. Two men played by Robert Pattinson and Willem Dafoe arrive on a small rocky island off the mainland. They’re supposed to spend a month manning the island's lighthouse, but wind up stranded when a major storm hits.

This may make it sound as though the movie has a plot. It doesn’t, not really. It’s about a strained, sometimes collegial relationship between two men — with overtones of homoeroticism thrown into an atmosphere that resists definition. In a way, you could say that The Lighthouse isn’t about either of the two men; it’s about the forces that fill the space between them.

Dafoe plays the older and more experienced of Eggers’ duo; Dafoe’s character bosses Pattinson’s character around, assigning him the dirtiest jobs, tasks such as emptying waste, carting coal for fires and scrubbing floors.

Dafoe’s character fancies himself a sea captain and, the movie — set in the 1890s — treats him like one. His speech is archaic and, as you’ll learn from a note at the movie’s end, some of the dialogue derives from Melville and some from the diaries of various men who tended lighthouses.

Dafoe's character may be delusional, no more a captain than Pattinson’s character is a member of his crew. The men are playing roles and, in some sense, the movie wants to see who can break out of his role to attain dominance.

I leave it to you to ponder such questions but I'll suggest that answers may matter less than the way Eggers (The Witch) creates an atmosphere of desperation and dread. He makes us the island's haunted isolation.

The shabby interior of the building where the men reside almost makes you cringe at its meager possibilities. When the two men sit to down dinner, you know that the food probably tastes awful. The wooden floors and walls of the men's quarters are on the verge of rot — if they haven’t already crossed the line.

I don’t know whether The Lighthouse is too weird to garner awards attention for the actors, but Dafoe — one of the screen's most adventurous actors — hits stunning notes, mixing cruelty and the urge to dominate with a kind of manly cordiality. The more wary Pattinson keeps pace, and I would say that these are two of the most fearless performances I’ve seen in some time.

Eggers fuels the tension by having his two characters consume increasingly large amounts of alcohol. They get drunk. Dafoe’s character delivers salty, poetic orations and you can see rebellion brewing in Pattinson’s face, his mouth threatening a sneer. He seems to be hiding a dangerous intelligence. He has an unpleasant relationship with the island's seagulls and maybe with all of nature.

Wild and unhinged, The Lighthouse may not be entirely comprehensible, but it sends you out of the theater in a way that colors perception, making your surroundings look more alien, more forbidding. Years ago, I remember reading a quote by Abel Gance, who directed the great silent epic, Napoleon. Said Gance, a movie should make you see the world differently than before you sat down to watch it. By that measure, Eggers has accomplished his task.