A director slips into depression 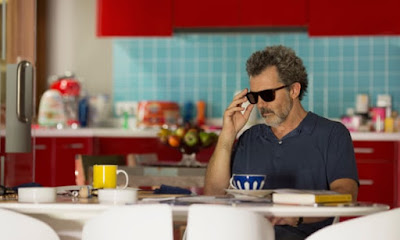 In Pain & Glory, director Pedro Almodovar tells the story of an aging director who's creaking has ways toward the last good night. As Salvador Mallo, Antonio Banderas makes us feel his character's pain even when he's doing something ordinary, getting out of a taxi, for example. A master of eye-popping color, Almodovar almost makes it seem as the blood has been drained from Banderas's face. But more about Banderas later.

Working in a reflective mode, Almodovar has made a movie that begs to be taken autobiographically.

Scenes in Mallo's home were shot in Almodovar's Madrid apartment. Banderas wore Almodovar's clothes during the filming and styled his hair in the swept-back fashion Almodovar favors. Of course, Banderas has a long history with Almodovar, having starred in Almodovar's Labyrinth of Passion (1982) and later in movies such as Law of Desire, Matador, Women on the Verge of a Nervous Breakdown and even later in films such as Tie Me Up! Tie Me Down! and The Skin I live In.

So, Pain & Glory arrives on-screen weighted with a history that's reflected in the screenplay when Mallo reconnects, after 32 years, with the actor (Asier Etxeandia) who starred in what apparently was the director's best film.

Mallo's connection with his past comes at a time when depression keeps him from work. He reads. He sometimes writes. But mostly he's holed up in his apartment, where he remembers his life as a child.

Flashbacks to childhood, some induced when Mallo decides to try heroin, show us the relationship between young Mallo (Asier Flores) and his mother (Penelope Cruz).

An early-picture close-up of Cruz washing clothes in a river near the village where Mallo was born so intensely captures Cruz’s beauty that it feels as if the image should be lifted from the screen and framed. It's practically a love letter.

In another flashback, we glimpse the future. Young Mallo auditions for a church choir. The other boys can't carry a tune but Mallo can sing. He has a voice.

Mallo recalls the birth of his sexual desire in a scene in which the young Mallo watches Eduardo (Cesar Vicente), a workman who's putting up tiles on the wall of the family's home. When a nude Eduardo washes away the dirt of work, Mallo is overwhelmed. His mother arrives home and we sense that she's confirming what she already knows about her son.

Almodovar, as always, is in fine form, but Banderas's performance makes the movie. It almost feels as if his bearded face is being pulled down by the drag of Mallo's depression. Banderas doesn't so much portray depression as embody it. With graying hair and beard, the handsome Banderas has made his face drab.

If the movie is meant to be autobiographical, Almodovar isn't always kind to himself. Mallo cruelly sabotages his renewed friendship with Etxeandia's character. He indulges in heroin and seems to treat the devoted woman who assists him (Nora Navas) as nothing more than a sounding board for his laments.

At one point, Mallo -- perhaps as an act of contrition -- gives his estranged actor friend the rights to a story he has written. The story becomes a one-man showcase for the actor, a stage production that's highlighted by a confessional recounting of the days when the narrator was unable to save a youthful lover from the ravages of heroin.

But even that story becomes suspect when, after many years, the lover (Leonardo Sbaraglia) returns to Madrid from Argentina. After accidentally stumbling across the play, he meets with Mallo. Turns out that the former lover is content, stable and living a life that seems altogether more fulfilling than Mallo's.

There also are scenes that seem lifted from life, as when Mallo listens to his now-aging mother instruct him in how she wishes to be displayed in her coffin. This rosary, not that one. And please, no bound feet. That might constrict her freedom in the afterlife.

Although there's a play within the movie and other references to art -- both visual and verbal -- Pain and Glory isn't nearly as playful as much of Almodovar's work. Winds of sadness and defeat blow through much of the movie. Even when we learn that Mallo will resume his career, it doesn't feel like a triumph. We've already seen that he has nothing in his life but filmmaking. Is that enough? Shouldn’t life have more?

Almodovar, who’s 70, paints a portrait of a cinematic bad boy in his twilight years. In a way, that makes Pain and Glory a story about the kind of loneliness for which no antidote has yet been discovered.