Maleficent: Mistress of Evil: a mixed and not entirely successful offering. 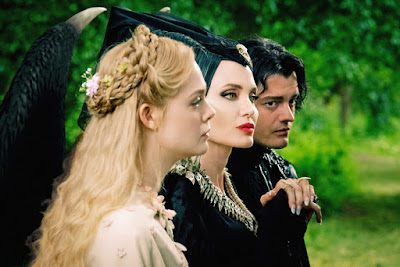 Let’s start at the end. Before it’s done, Disney’s Maleficent: Mistress of Evil indulges itself in a mega-helping of Disney cuteness that’s designed to please those who love their movies served with heavy doses of syrup, the kind that leave audiences with a corn-fed glow.

In this sequel to the commercially successful first edition, Angelina Jolie returns as Maleficent, the witch who detests humans -- aside from Aurora (Elle Fanning), the human daughter she raised. Maleficent has inviting ruby red lips, but you wouldn’t want to dance cheek-to-cheek with her lest you be impaled on cheekbones that jut outward like ski slopes.
In this edition, the creatures of the moors (fairies, mushrooms, and trees that spring to life) are threatened by the human kingdom where Princess Aurora (Elle Fanning) is scheduled to marry Prince Philip (Harris Dickenson).

The early, amusing part of this second helping plays like a fairy tale version of Meet the Parents. Maleficent opposes the marriage but agrees to have dinner with the royal family: good King John (Robert Lindsey) and his not-so-good wife Ingrith (Michelle Pfeiffer).

With prodding from her faithful, shape-shifting companion Diaval (Sam Riley), Maleficent does her best to be civil. Jolie shines when Maleficent struggles to suppress her venomous impulses.

The original movie went big on revisionism. The sequel follows suit. Most of the time we find ourselves rooting against the humans, whose destructive ambitions reach full bloom in the person of Queen Ingrith. Pfeiffer delivers her lines with as much sarcasm as she can muster. But because the dialogue isn’t all that good, the impact of the Queen Ingrith's archness feels dulled.

En route to its happily-ever-after, the movie sets off a war. Wounded as she flees that early-picture dinner, Maleficent is rescued by another winged creature with horns. Chiwetel Ejiofor's Connal presides over a cave-dwelling civilization of creatures who look like Maleficent but don’t have her super-powers.

Some of these creatures -- notably the war-mongering Borra (Ed Skrein) -- are fed up with living in exile from treacherous humans. They want to make war on the residents of the palace. The pragmatic Conall opposes such engagement, acknowledging that humans severely outnumber the non-humans.

If a fairy tale movie threatens a great battle, it surely must deliver one. Mistress of Evil whips up a CGI-fueled spectacle in which the fairy tale creatures are attacked with a concoction made from flowers that ...

Never mind. Nothing here makes a great deal of sense, but director Joachim Ronning mounts the final assault on a large scale as the humans threaten to pull off a fairy genocide.

So, to what does all this amount?

Another mash-up. Part cartoon, part action movie, part romance, and part fairy tale, Maleficent doesn't quite stake out enough turf in any of those categories totally to succeed. But it's been tailored to please its audience and probably will.

You either can view that as an accomplishment or a capitulation or (as I do) a mixture of both.

Still, when you get right down to it there’s this: Pfeiffer’s Ingrith is no match for Jolie’s Maleficent. That means every moment Jolie's off-screen (and there are too many of them) leaves us eager for her return.

Do we really care whether Aurora and Philip are able to marry or would we rather look at Maleficent with her majestic wings, flowing horns and towering cheekbones? You know how I’m voting.