Cynthia Erivo gives one of the year's most compelling performances in director Kasi Lemmons' Harriet. 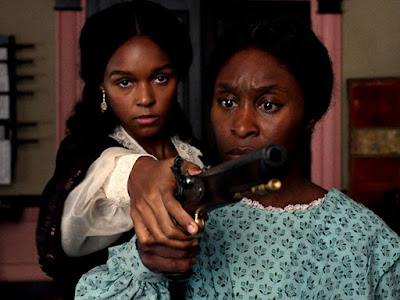 In Harriet, actress Cynthia Erivo comes across as a determined female warrior who battles the evils of slavery, freeing as many enslaved people as she can. With a face full of fury, Erivo creates a portrait of flinty resolve and unshakable faith. Tubman, who escaped slavery at the age of 27, became a "conductor" -- someone who guided the enslaved to freedom -- on the Underground Railroad. She already had won her freedom but wasn't satisfied, not when so many others were left behind to suffer.

As directed by Kasi Lemmons (Eve's Bayou and Talk to Me), Harriet paints a portrait of a woman who came to realize she had only one choice: Be free or die. Once Tubman decided that she'd rather be dead than enslaved, everything else followed.

In Maryland, Tubman was known as Minty. She grew up on a plantation and watched a sister being sold away from the family, an event that permanently scarred her, as did the lashes from the whips of slave masters.

Determined to flee, Tubman made a journey of 100 miles -- from Maryland to Philadelphia. She traveled alone.

Erivo creates a portrait of a woman possessed. Tubman was struck in the head as a child, an event that some say accounted for the religious visions that she claimed to have. Erivo's fierce portrayal leaves little doubt that if Tubman said she talked to God, you'd best believe her. She's like an American Joan of Arc. Employing a different religious reference, frustrated plantation owners dubbed her "Moses."

Part action hero and part American icon, the Harriet that emerges on screen kicks butt and, yes, that's satisfying, given the people whose butt she's kicking. A born leader, she refuses to allow anyone (even the politically cautious abolitionists she meets in Philadelphia) to define her.

The evil white slavers find their fullest representation in a character named Gideon Brodess (Joe Alwyn),
a severe slave master who won't rest until he returns Tubman to his plantation. At one point, he hires black slave hunters to help him in his quest. Gideon's mother (Jennifer Nettles) can be even worse, a hysterical woman who sees her beloved plantation sinking deeper into debt.

The movie's Philadelphia setting produces the movie's strongest supporting characters. Janelle Monae plays a woman who owns a boarding house and Leslie Odom Jr. portrays an abolitionist who introduces Tubman to the Underground Railroad. At various points in the movie, Clarke Peters appears as Tubman's father.

Lemmons sticks pretty much to surface, and, at times, Harriet seems more of an action movie than it needs to be. Put another way, Harriet sometimes feels more attuned to the demands of contemporary moviegoing than to rhythms that would have been more reflective of the period in which Tubman lived.

With Harriet, what you see is what you get and the movie emerges as a kind of primer on Tubman's life that's built around a compelling performance. I agree with those who think it should have been more than that, but Lemmons' big-screen biography sets its own terms and lives within them.