Thomas Edison and George Westinghouse square off in The Current War, an oddity of a movie. 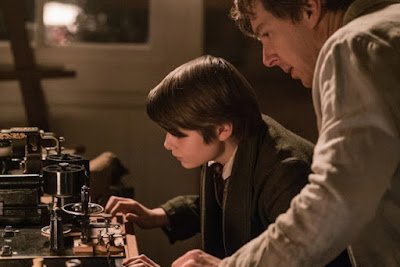 The Current War: Director's Cut is a difficult movie for me to review. Before it was described as "the director's cut," the movie premiered at the 2017 Toronto International Film Festival. It was slated to be released by the Weinstein Company, but Harvey Weinstein's #MeToo exposure intervened.

Two years later, the movie found a home with 101 Studios. Director Alfonso Gomez-Rejon reportedly did some re-editing, added scenes and reduced the film's running time. Is it better than the version that played Toronto? I didn't see the movie then, so I can’t say.

I wondered, though, whether Gomez-Rejon (Me and Earl and the Dying Girl) didn't insist on a director's cut so that the movie -- which received a lukewarm reception in Toronto -- could be seen with fresh eyes.

Whatever the case, the movie that now arrives on the nation’s screens is a bit of an oddity.

Gomez-Rejon has tried (boy, has he tried) to make a visionary movie about visionaries, a choice that puts the movie in an odd position: It’s competing with its characters.

The story centers on the battle between Thomas Edison (Benedict Cumberbatch) and Geroge Westinghouse (Michael Shannon), two great names of American invention and commerce. A third revolutionary, Nikola Tesla (Nicholas Hoult) works his way into the story, first as an employee of Edison and later as an ally of Westinghouse.

To the extent that there's more at stake than money and, of course, power, it's worth noting that Edison represents invention in its purest form. Westinghouse takes a more commercially oriented view. Because alternating current was cheaper and could carry over longer distances than direct current, Westinghouse deemed it the better bet.

This is not to say that Edison becomes the movie's hero. He's arrogant and not especially friendly. Instead of making him admirable, his commitment to principle makes him a pain in the butt. And Westinghouse -- though capable of underhanded behavior -- seems genuinely interested in making the world a better place.

It takes an actor as good as Shannon to convey the complexities of Westinghouse's personality and I half wished that the movie had been more about Westinghouse than Edison.

Safe to say that the 19th century battle about the future of electricity isn't easy to dramatize. But it’s Gomez-Rejon's unrelenting commitment to an arty style that makes the movie difficult to embrace: He uses endlessly shifting camera angles, dark lighting, and other self-conscious cinematic gestures in ways that sometimes wall off us off from the story he's trying to tell.

The Current War also creates an atmosphere that is intriguing and strange -- incredibly detailed and yet somehow weirdly unfamiliar.

There isn't much by way of memorable work from the movie's supporting cast.

Gomez-Rajon hints at the dark side of technological advance by introducing the invention of the electric chair, which was supposed to take the cruelty out of capital punishment but which might have made things worse. Both Edison and Westinghouse were compromised by their positions on the use of the chair.

All of this builds toward a competition over who will land the contract to light The Chicago Exposition of 1893, a major coup for whoever wins the day -- or, better put, the night.

Gomez-Rejon whips up some excellent imagery and the story generates interest. And yet ... as I've said ... The Current War isn't so much a failure as a puzzlement, a movie that, in my view, creates too many impediments to its fullest appreciation.