Film Stars Don’t Die in Liverpool but the movie, alas, does. 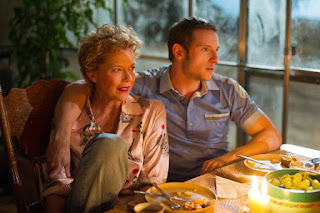 Peter Turner was a 26-year-old aspiring actor when he met Gloria Grahame in 1979. At the time, Grahame was a 55-year-old fading movie star appearing in a London production of Rain. The two began an affair that became the subject of a book by Turner, who, as a young man, was holding things together by working in a second-hand furniture store.

Grahame, who won a best-supporting-actress Oscar for her work in The Bad and The Beautiful (1952), was known mostly for playing the femme fatale in a variety of film noir movies. She died of cancer in 1981.

Of all the chapters in Grahame's life, the final one -- the subject of Film Stars Don't Die in Liverpool -- struck me as the least interesting. I took a quick trip to Wikipedia to refresh see if I might be right.

I think I was. Grahame was married four times. Her marriage to director Nicolas Ray fell apart when Ray caught Grahame in bed with Anthony Ray, his 13-year-old son from a former marriage. Grahame later married the young man, who by the time of the wedding had arrived in his 20s. When her third husband, Cy Howard, discovered she had secretly married the younger Ray, he sued her for custody of their daughter.

And I haven't even mentioned Grahame's screen life, which placed her opposite Humphrey Bogart in the great but somewhat overlooked In a Lonely Place. She also worked with in director Fritz Lang's The Big Heat and a variety of other movies. Grahame eventually drifted into a career in episodic television. When things really collapsed, she headed to England. She became Turner's lover and friends with his Liverpool-based family; they took her in when she was dying from cancer.

In director Paul McGuigan's movie, Annette Bening plays Grahame. Jamie Bell portrays the devoted Turner, who at one point accompanies Grahame to Los Angeles and later to New York, but returns to England when Grahame gives him the cold shoulder. The actress had learned that her breast cancer had returned. As the movie has it, she didn’t want to involve Turner in a relationship. that had nowhere to go.

Bell does his best to convey a smitten young man whose patience eventually gives way to frustration, but who still spends time with Grahame when she takes up a brief residence with his parents (Julie Walters and Kenneth Cranham) in Liverpool.

McGuigan employs flashbacks as he moves from Grahame's cancerous languor in Liverpool to the story of Grahame's relationship with Turner. But by dwelling on this May/December romance and Grahame's illness, McGuigan doesn't really do justice to Grahame's life.

The movie manages to spit some welcome venom when we meet Grahame's mother (Vanessa Redgrave) and her sister (Frances Barber). It's not enough to save the movie.

Bening doesn't look like Grahame but conveys some of the grit and resilience of a star who has lost her luster. Still, the mournful, sentimental Film Stars misfires, perhaps because -- in focusing on Turner's book -- it slices too much meat off the bone of Grahame's tumultuous life.