A big fight over a tiny house

Catherine Keener stars in a story about a Connecticut woman's battle to save her home. 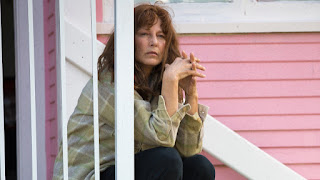 The issue of eminent domain receives a modest work-out in Little Pink House, a real-life drama in which Catherine Keener portrays a paramedic who takes on powerful economic interests in order to retain ownership of her Connecticut home.

Keener plays Susette Kelo, a woman who works long and hard to buy a house overlooking the water at a spot where the Thames River meets the Long Island Sound. Kelo renovates the house, paints it pink and settles in for her own version of happily-ever-after.

For Susette, the Little Pink House is more than a place to live; it represents a dream fulfilled.

But the town of New London has other plans for Kelo's property. Spurred on by the state's governor, a non-profit development corporation led by a character named Charlotte Wells (Jeanne Tripplehorn) wants to develop the property in the Fort Trumbull neighborhood where Kelo and others have lived — some for most of their lives.

Tripplehorn’s Charlotte believes that development ultimately will help the town’s poorer residents. She mixes social and corporate concerns in hope that Pfizer — the drug company then on the verge of its Viagra boom — will select Kelo's neighborhood as a site for expansion. In Wells' version, the city wins. Pfizer wins. Everybody’s happy — except, of course, the homeowners who don’t want to move.

Eventually, a lawyer (Giacomo Baessato) who’s part of a non-profit group takes Susette’s case, pushing it all the way to the US Supreme Court. Kelo and cohorts lost the case. In a 2005 ruling, the court established that the city's plans did not violate public use clauses of either Connecticut or US law. Put another way, the court decided that economic interests can, in some cases, serve to benefit the public.

I wondered if director Courtney Moorehead Balaker could have infused the movie with a little more outrage, fury springing from the clash of values that animates her film.

The point may not come as a shock but it's worth restating: New London's battle over real estate demonstrates that individuals face an uphill battle when it comes to fighting interests with big bucks behind them.

*
*A footnote: The land at the heart of this battle reportedly still remains vacant. Pfizer went in another direction. In the end, it's appropriate to ask, did any of the movie's characters win anything?