A mournful World War I story

A young officer mixes with hardened vets in Journey's End. 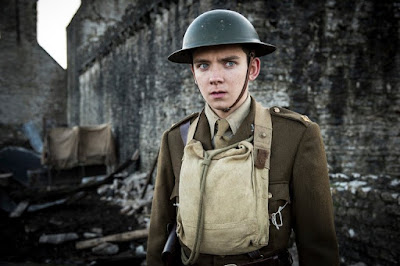 As time passes, World War I seems to have lost its grip on the popular imagination. The ill-named "War to End All Wars" shouldn't be forgotten, which is one of the reasons Journey’s End -- a World War I drama based on a 1928 play by R.C. Sherriff -- makes a welcome contribution to cinema’s inexhaustible canon of films about the horrors of war.

Director Saul Dibb puts us in the midst of the trench warfare that defined World War I. Claustrophobic as life in the trenches and sometimes constricted by its theatrical origins, Journey’s End nonetheless arrives as a mournful depiction of loss, particularly among young soldiers who had little idea what the war would do to them.

The movie centers on Raleigh (Asa Butterfield), a young officer who arrives at the front asking to be assigned to the company of a former school chum Capt. Stanhope (Sam Claflin). A man he views as a mentor, Stanhope also is engaged to Raleigh's sister.

By the time Raleigh arrives in the trenches, Stanhope has left the reality of the home-front far behind. He has been shocked into cynicism about the nature of warfare. Naive and eager, Raleigh doesn’t receive the hoped-for welcome from a man who can’t seem to drink enough alcohol to quiet his sense of fear, anxiety, and hopelessness.

The year: 1918 and the British soldiers are playing a waiting game as the Germans prepare to launch a major spring offensive.

Stanhope wants little to do with the wide-eyed Raleigh, who’s taken under wing by Lieutenant Osborne (a terrific Paul Bettany), a former school teacher who doesn't seem to have been crushed by the mud, boredom, and apprehension of a war that required harrowing night patrols and in which men could be gunned down even before they could even leave their trenches. The other soldiers refer to Bettany's character as "Uncle."

Journey’s End won’t unseat Stanley Kubrick’s Paths of Glory as one of the great World War I films, but the performances are strong and, the movie proves sorrowful and moving, a reminder that many of the men who fight are destined to become bodies strewn across ravaged landscapes that hardly seem worth the trouble.

Living with that knowledge takes its toll on men of Company C and — as it should — on us.

Sheriff's play, by the way, was adapted for the screen in 1930 by director James Whale (Frankenstein), but the story is worth repeating and Dibbs does it well.