A quirky story about young outcasts 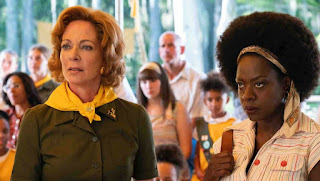 Set in 1977, Troop Zero tries (boy does it ever) to uphold the rights of young outcasts to claim their place in the world, maybe even in the entire universe. Directors Bert & Bertie, a British directing team, build their story around Christmas Flint (Mckenna Grace), a girl who’s an outsider in the small town of Wiggly, Georgia. Christmas's widowed dad (Jim Gaffigan) plies his trade as an attorney, losing most of his cases and seldom being paid for his efforts. Gaffigan’s Ramsey Flint expects his assistant (Viola Davis) to look after his daughter, a task she approaches responsibly but not happily. The plot begins when Christmas makes friends with a girl who formerly bullied her (Milan Ray). She then assembles a group of girls to join the Birdies, scouts who are vying to see which of them will win a chance to record a message that NASA will send into space. The local Scout Master (Allison Janney) reluctantly accepts Christmas's crew as Birdies, labeling them Troop Zero. Lest boys feel left out, Birdie Troop Zero includes Christmas's best friend, Joseph (Charlie Shotwell). Of course, a group of by-the-book Birdies demeans the outcasts. The young actors do well enough and Davis’s portrayal suggests unexpected complexities for a movie that seems to want to be quirky and endearing at the same time. Christmas’s individuality takes a strange form: She’s a bed wetter, which the movie tries (weirdly, I think) to turn into a gesture of assertive defiance set to the tune of David Bowie's Space Oddity. A real emotional issue (grief over a lost mother) rises to the surface at the end, but an over-commitment to quirkiness can make Troop Zero feel like a song played out of tune.